The Mergui Archipelago, a collection of 800 islands off the west coast of Myanmar, is a heaven of biodiversity home to lush mangroves, beautiful coral reefs, and many incredible species like giant manta rays, whale sharks and sea turtles. This magical place, like many similar to it, is at risk as problems like pollution, climate change, and human impact begin to take hold. These factors negatively affect the fragile environment and, in extreme cases, can cause the extinction of indigenous species.

Aptly called ‘the forests of the sea,’ coral-reef ecosystems feature the most biodiversity on the planet. They provide a home for over 25 percent of the marine species in our oceans and allow them to live, breed, and eat safely. Although most people don’t realize their importance in the matter, coral reefs also provide half of the planet’s oxygen and absorb nearly a third of the world’s carbon dioxide.

Not only are coral reefs essential for marine species, but also help support human life and the viability of ecosystems both above the water by serving as barriers for landmasses, protecting them from waves and tropical storms.

“Ocean Quest Global is a global movement created to provide environmental education to the public especially about coral reef restoration,” says Abdullah. With over 2,000 trainers worldwide, Ocean Quest Global has fueled conservation projects in Indonesia, Malaysia, Thailand, and recently Myanmar. These trainers establish a coral nursery wherever they go and teach locals about the benefits of the project, as well as seek to expand their horizons. “We have now taken on island sustainability and forest conservation as well,” says Abdullah. “Hence the new tagline, ‘Global Environmental Conservation’”.

Abdullah’s involvement in conservation began in 1980 with research in ocean conservation and a focus on coral reefs. “Back then, I had no foundation, and I was contributing my work to others,” he says. “By 2006, I had left many of the NGOs that I had been contributing to because I no longer trusted their work. I even began to believe that conservation was largely lies and I had abandoned it.”

His frustration led him to embark on a sailing journey where he continued personal research and learned how to propagate corals organically. By 2008, his extensive knowledge of coral allowed him to begin writing a coral-propagation manual and, a year later, he began to consider establishing his own foundation. “I started writing the standards and policy for Ocean Quest in 2009,” he says. “In August 2010, we founded Ocean Quest.”

With the support of partners such as The Department of Marine National Parks in Thailand, Memories Group, Aman Group, DHL, Gili Eco Trust, TRACC, and Coral Alliance, Ocean Quest Global has developed a model for raising awareness in a hands-on way by offering directed education.

“Ocean Quest Global’s mission is to make coral propagation knowledge universally available to everyone, hence the platform we choose to implement is through training,” says Abdullah. “It consists of workshops and courses designed for anyone to learn how to propagate corals without the use of artificial materials.”

Ocean Quest Global has also established coral-nursery projects in 74 locations around the world, which are eager to accept any volunteers willing to help. Another part of their plan is to educate local coastal communities on the benefits of the coral reefs in order to preserve them. Many communities don’t realize that their interactions with the reef have a negative environmental impact and educating them about this is an essential part of effectively rehabilitating the reefs and increasing their chances of long-term survival. Abdullah firmly believes that by offering these communities essential knowledge they will be able to improve the situation for both humans and corals.

Since its establishment, the NGO has celebrated several environmental victories. Their first successful project was in Pulau Kapas in Malaysia. There, the coral nursery successfully restored more than 2.5 acres (10,000 square meters) of damaged reef, which still attracts visitors and volunteers looking to use it as an example for their own restoration projects, including the Department of Marine National Park Thailand.

This was a particularly valuable alliance, as it allowed Ocean Quest Global to become a heavy hitter in the conservation community in the south Andaman sector. This also permitted them to participate in the restoration initiatives in Maya Bay. Since the closure of the famously stunning setting of the film The Beach in June 2018, over 40,000 corals have successfully been propagated.

This is a particular triumph, as Thai coral reefs have long been under siege. “For many years, I have been skeptical about Thailand,” says Abdullah. “Now that I am part of their conservation effort, I saw improvements. Not just the officials, but the travel operators and services are aware of the benefits. The closure of Maya Bay, for example, was faced with strong resistance in the beginning. But now that they see success and the growing number of blacktip sharks at the dive sites around the island and improvements of the coral reef, people begin to appreciate it.”

Last year marked the 10-year anniversary of Ocean Quest Global and it continues to build up momentum while maintaining a realistic stance on the current global state of affairs. Abdullah remains positive and proactive but leaves us with these words of wisdom. “As human beings we are consumers,” he says. “Nature can provide for as long as we care not to harm it. It is a source of food, income, and recreation. If we care for them, the resources will become everlasting. If we continue to destroy nature, we continue to face problems, such as with COVID-19.” The choice is ours.

Author Camille Fogarolo and photographer Franck Fogarolo opened The Smiling Seahorse liveaboard in 2012 to offer cruises to the Mergui Archipelago of Myanmar, the most unexplored area of Southeast Asia. 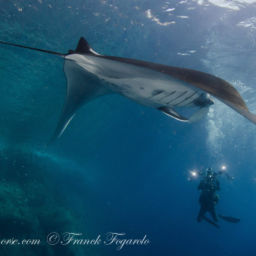