There are generally two types of divers when it comes to marine life: those who favor the big stuff, and those who hunt for macro animals. Divers who seek the small stuff take pride in their keen eyesight and attention to detail and prefer to dive slowly with their mask mere inches from corals and sponge. Macro life is bizarre and intriguing and includes some of the ocean’s most elusive masters of disguise, as well as some of the most effective predators.

Macro life in the Mergui Archipelago

The Mergui Archipelago in Myanmar (Burma) is a veritable playground for macro enthusiasts. This vast area features over 800 islands and 3,000 islets, flanked by pristine reefs. The seascape’s many nooks and crannies set the stage for a 3-ring circus of crustaceans, pipefish, seahorses, frogfish, cowries and nudibranchs, just to name a few. There is so much macro life in the Mergui Archipelago, in fact, that we’ve broken our guide into two parts, starting with this one. Harlequin shrimp usually live in pairs and are thought to mate for life, hunting and defending their territory together. These relatively shy shrimp tend to choose enclosed, dark areas and stay close to home.⁠ They are gruesome hunters, feeding exclusively on starfish — including the destructive crown of thorns, which can be up to 100 times larger than the shrimp in both size and weight.⁠ A mating pair will hunt down their prey, flip it onto its back and drag it back to their lair to eat starting with the tube-like feet on its underside. They are even known to force-feed the echinoderm to keep it alive and fresh while they feast. These fuzzy little guys have small bodies and long arms that are completely covered in dense reddish-brown hairs. Part of a family known as decorator crabs, they comb the seabed and reef looking for small bits of shells, gravel, and debris to lodge into their fur to help blend in. They are very clever and have been studied in different environments where they always select decorations based on what will camouflage best in their particular surroundings. Find them hiding in bubble coral during the day and hunting the seafloor at night. Another breathtaking marine curiosity, this crab’s appearance is reminiscent of something you would see in a Japanese anime cartoon. With a vibrant pink body, it mimics the colors and textures of the soft corals it takes refuge in. Growing to a maximum of ¾ inch (2 cm), its legs and carapace are covered in vivid spiny tubercles, which can vary in color depending on its habitat. It is also known to attach polyps to itself to further increase its camouflage. Skeleton shrimp are such a bizarre-looking crustaceans that it’s hard to believe that Tim Burton didn’t dream them up. They can grow up to ¾ to a little over one inch (2 to 3 cm) long but, unlike many marine species, the males are usually significantly larger than the females. Wiry and transparent, they have many legs that each have a specific purpose. The front legs are tipped with tiny claws for defense and feeding but they also use these to drag themselves along. These tiny crabs rely on their home for camouflage. Their coloring will often depend on the coloring of the black coral or sea whip that they live in symbiosis with. They sometimes use algae or even the polyps of their host to decorate their carapace for even more discreet blending. Growing up to ¾ inch (2 cm) long, the xeno crab feeds on microalgae and small fish. They are normally solitary however, when they are young, they have been known to hang out with a buddy. This adorable pipefish grows to between 3 and 4 inches (8 and 11 cm) long. They have a long snout and a pale body with orange and white markings. These shy animals prefer to live in areas shallower than 39 feet (12 m) on sandy bottoms or in small crevices and caves and often retreat to more sheltered areas as divers approach. Like the seahorse, the male orange-spotted pipefish will carry 200 to 400 fertilized eggs that the female deposits into his brood pouch to incubate for 14 to 17 days before they hatch. This intriguing creature, also called a double-ended pipefish, prefers to live in sandy seabeds up to 130 feet (40 m) deep. They often travel in pairs, sitting with their heads raised into the current to feed on drifting zooplankton. Reaching a length of 15 inches (40 cm), their bodies are long and slender with a small head that resembles a seahorse. They are a bit thicker around the middle and they use this area, along with the ventral caudal fin, to grab onto the sand and resist the water movement. Their back legs form a kind of stalk that helps them grip whichever substrate they perch on for feeding. They can vary in color depending on where they live, but we often see shades of black and brown in Myanmar. Arguably one of the most difficult macro critters to spot on the reef, this type of pipefish grows to only 4.7 inches (12 cm) and is a master of disguise. Although we know little about them, it is suspected that they spend most of their lives drifting in the current in a larval state and only settle on the reef to find a mate. The female is usually larger than the male and will die shortly after giving birth. They hover face down and adopt distinguishable red, orange or yellow markings that help them blend in quite effectively with their new home. The tiger tail seahorse is an adorable specimen usually living in monogamous pairs. They occur in different color patterns and textures that can change for camouflage. More often than not, however, they are yellow with black stripes on their tail, which inspires their name. They will live on average 1.5 years, growing up to 7.3 inches (18.7 cm) and usually stick to the same sponge or kelp. They feed on tiny crabs, clams and shrimp but they have no teeth or stomach, so they feed via suction. Did those hydroids just move? That’s what I thought the first time I saw this minuscule critter. Hidden among rocks and debris or in crevices, the spiny tiger shrimp prefers to live in the company of at least one other individual or sometimes a small group. Growing to only ¾ inch (2 cm) long, their bodies are covered in spots, stripes and tiny spines that resemble algae or hydroids. As they are so small, they have developed this appearance to blend into their surroundings and avoid getting gobbled up by larger fish.

AUTHOR CAMILLE FOGAROLO AND HER HUSBAND FRANCK OWN THE MV SMILING SEAHORSE LIVEABOARD, THE NEWEST DIVE BOAT IN THE AREA. ALL IMAGES COURTESY FRANCK FOGAROLO. 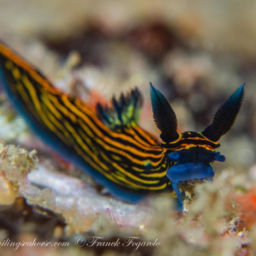