Macro life in the Mergui Archipelago is abundant and diverse. Here’s the second of a two-part guide to the region's tiny treasures

There is magic in finding a creature the size of a grain of rice hiding within the reef. Macro life is bizarre and intriguing and includes some of the ocean’s most elusive masters of disguise, as well as some of the most effective predators.

The Mergui Archipelago in Myanmar (Burma) is a veritable playground for macro enthusiasts. This vast area features over 800 islands and 3,000 islets, flanked by pristine reefs. The seascape’s many nooks and crannies set the stage for a 3-ring circus of crustaceans, pipefish, seahorses, frogfish, cowries and nudibranchs, just to name a few. There is so much macro life in the Mergui Archipelago, in fact, that we’ve broken our guide into two parts. This is the second — find our first round of macro magic here. Like little medieval knights, pinecone or pineapple fish are covered in armor-like scales with a distinctive yellow and black pattern that gives them their name. Growing up to 6.7 inches (17 cm), they are nocturnal and have a special party trick for their midnight hunts. Their mouth, which is in a perpetual scowl, contains bioluminescent plankton which glows either green as juveniles or red as adults. Much like anglerfish, this little raver can control when the light comes on to lure in unsuspecting prey. Also known as the tapestry shrimp, this shrimp looks like it’s dressed in several of your grandmother’s curtains all at once. Its flamboyant patterns, although mismatched, help it blend into its surroundings like many of its shrimp cousins. It is mainly nocturnal and will change colors to mostly red to blend in better in the dim twilight. Quite shy, they like to live in coral rubble and duck in quickly when they see a diver, which makes them quite hard to photograph. It is a scavenger that will forage for meaty morsels of plankton and other organic edibles forgotten in the debris. One of the heftier macro creatures in the Mergui Archipelago, the peacock mantis shrimp can grow up to 7 inches (18 cm) long. If Joseph’s Amazing Technicolor Dreamcoat came alive, it be this shrimp. Furthermore, these creatures have the capacity to perceive a much wider color spectrum than human eyes so we might not even be able to see the full extent of its psychedelic coloring. They also possess super strength, with the ability to punch as fast as a 22-caliber bullet travels. Even if they miss their mark and don’t make contact, the blow will boil the water instantly, creating a shockwave so strong it can be deadly to its prey. The Spanish dancer is probably one of the world’s most famous varieties of nudibranch. Usually between 8 to 16 inches (20 to 40 cm) long, Spanish Dancers can be seen at night either on the reef or sometimes even swimming. They also often feature a hitchhiker or two, the smaller-than-2 cm emperor shrimp. Although these shrimp are considered commensal, they actually have a mutualistic symbiosis with the nudibranch. The shrimp eats tidbits stirred up by the nudibranch and receives protection and a lazy way to travel around the reef. In return, it will clean up any parasites or debris from the nudi’s skin. Too numerous to name, the Mergui Archipelago is bursting with these colorful mollusks. The region’s 3,000 species of confirmed nudibranchs, which range from .15 to 23 inches (4 mm to 60 cm), get their name from their exposed lungs. Depending on the species they may have either branchial plumes or cerata on their backs to breathe. They also have adorable little horn-like protrusions on their heads called rhinophores, which are their main sensory organ. A rainbow of colors, they are mimicry experts, adopting the coloration of their habitat and also warning potential predators of their toxicity. Very creative with self-defense, some even ingest the stinging cells of jellyfish and display them on their backs. You can find this carnivorous mollusk munching away on gorgonian sea fans and other soft corals below 65 feet (20 m). They can grow up to .6 inches (1.5 cm) long and have a magnificent patterned shell resembling a tiger’s stripes. Like other cowries, there is a small gap on one side of the shell where you can see and orangey-yellow foot spotted with black. These are few and far between and a real treat to find when you can spot them. Pygmy squid are impossibly adorable. Reaching only .4 inches (1 cm) long, it’s easy to confuse these teeny tiny cephalopods with baby squid. They have a special gland on their underside that allows them to stick to the underside of seagrasses to wait for unsuspecting prey. Pygmy squid mostly eat very small crabs and shrimp but are sometimes brave enough to try to eat crustaceans nearly as big as themselves. They will sneak up on their prey from behind and bite through its nerve cord so that it can no longer move or try to flee. Seamoths usually crawl along the sandy sea floor with their adapted pectoral fins, searching for food. These wing-like pectoral fins can also fan out to help the animal move more quickly and fly over the sea floor or to try and scare off predators.  They have no teeth but instead make a sort of tube out of their mouths to suck tiny invertebrates and worms up out of the sand and through their snout. They often travel in pairs and shed their bony, textured skin every few days to rid themselves of parasites. Frogfish belong to a family of anglerfish that includes over 50 unique members. These grumpy little lumps can range from 1 to 15 inches long (2.5 to 38 cm) with huge variations in color and texture. They will always match their appearance to their habitat of choice and sometimes even have a layer of hydrozoa or algae growing on them. They have flat pectoral fins that allow them to crawl across the reef since they aren’t very good swimmers. As an anglerfish, they have an illicium or “rod” that grows in the place of dorsal fins. The rod’s shape mimics their prey’s favorite snack to lure them in unsuspectingly. 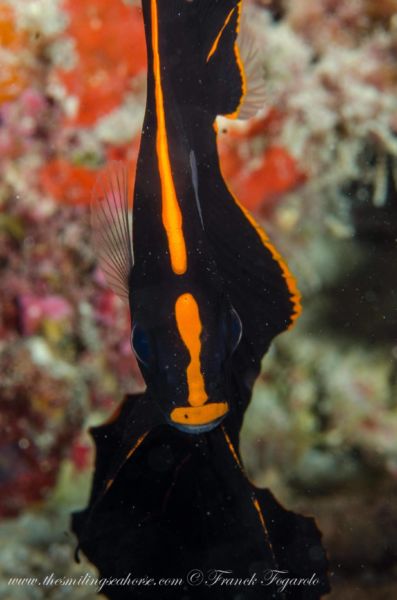 The shaded batfish, also known as pinnate spadefish, have a special symbiosis with the reef, as one no other type of fish eats one of their favorite seaweeds to snack on, which gives them sole responsibility for controlling its growth. The juvenile, as pictured, is one of our favorite types of fish to search for on a night dive. At this stage of life, they are boomerang-shaped, with their fins appearing much longer relative to their body size than as adults. They are inky black with a single orange line running along the edge of their body. This coloring deters predators by mimicking a specific type of poisonous flatworm.

The Mergui Archipelago is a paradise for macro enthusiasts but also has a lot of larger visitors, such as oceanic manta rays and whale sharks. But that’s the topic of another article.

AUTHOR CAMILLE FOGAROLO AND HER HUSBAND FRANCK OWN THE MV SMILING SEAHORSE LIVEABOARD, THE NEWEST DIVE BOAT IN THE AREA. ALL IMAGES COURTESY FRANCK FOGAROLO.