A new continent may be about to join the seven we recognize today. In a recent paper published in the Geological Society of America’s Journal (GSA), scientists have determined that almost entirely submerged Zealandia meets the criteria.

Bruce Luyendyk, a professor of marine geophysics at UC-Santa Barbara, first proposed the concept of Zealandia in 1995. Scientists have been gathering data ever since. In February 2017, a team of geologists from New Zealand, New Caledonia and Australia reviewed the data about Zealandia and confirmed that this vast underwater landmass is a continent. Zealandia is 94 percent submerged and covers an area of 1.9 million square miles (5 million square kilometers). The only above-water representatives of Zealandia are New Zealand, New Caledonia, and Norfolk Island and the Lord Howe Island group, both belonging to Australia. Although parts of separate countries, all are connected underwater. Defining the newly discovered landmass as a continent offers a fresh perspective for investigating continental processes and a more accurate description of the region’s geology.

Zealandia is an area of continental crust that once made up 5 percent of the ancient supercontinent Gondwana, which formed 600 to 530 million years ago. Gondwana included most of the landmasses of today’s Southern Hemisphere and some of the Northern Hemisphere as well. It began to break apart about 184 to 132 million years ago and eventually formed the continents that exist today.

The new continent first broke away from Gondwana as a ribbon continent. It sank after separating from Australia 85 to 60 million years ago. The new continent now sits 15 miles (25 km) off the coast of Queensland, Australia. It is half the size of the Australian continent and its highest point is Aoraki — Mount Cook, New Zealand.

What makes it a continent?

A landmass needn’t be above-water to qualify as a continent. Rather, scientists looked at a specific set of criteria when classifying Zealandia. The new continent had to feature elevation above the surrounding area. It also needed distinctive geology, a well-defined area, and a crust thicker than the regular ocean floor.

Since no scientific body formally recognizes continents, inclusion of Zealandia on the list depends on ongoing research and acceptance of it as such in the future.

Can we dive Zealandia?

Unfortunately for divers, this new discovery doesn’t mean a new continent of dive sites. Water depth in the ocean surrounding Zealandia is about 13,000 feet (4,000 m). So we’ll have to limit our exploration to its above-water landmasses. Both the North and South Islands of New Zealand, as well as New Caledonia, offer some spectacular dives. 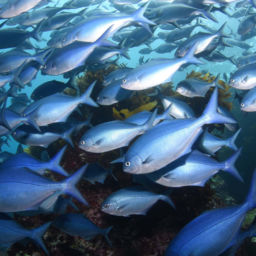