The social-media explosion means our access to amazing underwater images has grown exponentially. Here are 10 of the best underwater Instagrammers you should be following right now.

Historically, the mediums for mesmerizing underwater photography and videography were limited to a few nature or diving magazines, television and a handful of professional websites. But as social media grows, it’s easier than ever to seek out high-quality photography. Instagram in particular has become a powerful platform for underwater photographers to share their work with the world. Although there’s a seemingly infinite number of active users, we’ve scoped out a few of the best. Here are 10 top underwater Instagrammers that you should be following right now. Our first pick almost goes without saying — the official Instagram account of Scuba Diver Life. Here you’ll see images and short videos of various marine life, from nudibranchs and cuttlefish to dolphins and humpback whales in Tonga. Many of the photos and videos were shot by Nadia Aly, the Scuba Diver Life CEO (see next entry). Nadia Aly, founder of Scuba Diver Life, also maintains a personal Instagram account. Here you’ll see gorgeous images of her underwater adventures, including shots of sharks, wrecks, free divers and macro critters. She also shoots aerials of landscape and scenery, so there’s something for everyone. The third of our underwater Instagrammers is wildlife photojournalist Brian Skerry. His Instagram feed features artful images of some of the ocean’s most photogenic creatures, from great white sharks to seals, turtles and tiger sharks. Heavily involved in conservation, National Geographic and Explorer-in-Residence Dr. Enric Sala launched the Pristine Seas project to help protect the ocean’s remaining wild places. His Instagram feed, though short at only 37 posts, is still worth watching as he’s a talented photographer as well as an ocean crusader. His images include macro as well as large marine life and some terrestrial animals as well. 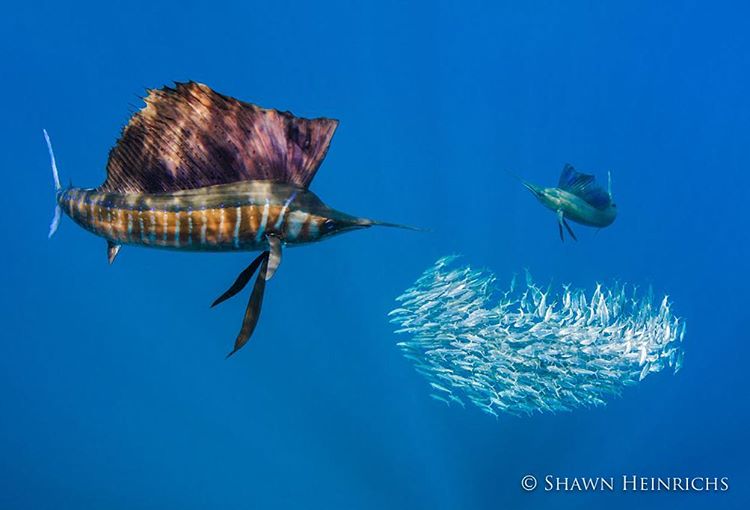 Another well-known conservationist, Shawn Heinrichs, has been heavily involved in manta and shark conservation for years. His feed features lots of inspirational images of the ocean’s largest fauna, as well as information on new manta and shark protections. But be prepared for a number of sobering images as well, depicting everything from shark finning to manta hunting. An initiative of the Sylvia Earle Alliance, founded by “Her Deepness” Sylvia Earle, Mission Blue works to generate public support for worldwide Hope Spots, in which ocean conservation can do the most good. The ultimate goal is to create a network of marine-protected areas, constituting 20 percent of the ocean, by 2020. Instagram posts on this account feature everything from underwater shots of divers to critters and beautiful ocean sunsets, as well as inspirational conservation posts and quotes. Shooting mostly macro, underwater photographer Mike Bartick captures the best of Anilao in the Philippines, where he’s based. Expect brilliant, up-close images of tiny, colorful critters like nudibranchs and blennies, as well as slightly larger animals like cuttlefish, octopus and frogfish. Based in Hawaii, photographer Alicia Ward shoots a variety of artfully composed underwater scenes, some with snorkelers and most all with marine life. Her creative imagery features pelagics, schooling fish, turtles — and even mermaids. Her videos are just as exciting as her photos. Last but not least is the inimitable David Doubilet, whose photos take us around the globe. From tropical coral reefs to the icy waters of the Arctic, his images don’t disappoint. His artistic, award-winning images set a standard for other underwater photographers to follow.