It’s not common knowledge, but Canada offers some of the best diving in the world, in some of the most untouched marine environments. Divers can encounter sea lions and sixgill sharks, and explore wrecks from the 18th century, often in pristine condition. To let the cold scare you off is to forgo fresh- and saltwater diving that will leave you gasping with wonder. Most, if not all, of these sites are best dived in a drysuit; consider adding that certification to your repertoire and a world of cold-water diving opens up to you. So, what are the best dive sites in Canada? Here are our top five picks, as chosen by Canadian divers themselves.

Just across the St. Lawrence River from New York State, along a stretch of the river between Rockport and Brockville, there are more than a dozen wrecks to explore. You might start with the wreck of the Robert Gaskin. A two-masted wooden schooner that sank in 1889, it’s in relatively shallow water, between 55 and 70 feet (17 and 21 m). What’s more, the current in this part of the river is moderate, so the Gaskin makes a good place to start your Brockville diving experience. Look for the schools of bass and perch that hang around on the downriver side of the wreck.

Once you’ve got a few dives under your belt, you can graduate to my personal favorite, the Henry C. Daryaw, a 220-foot steel freighter that sank in 1941 when it collided with another ship in the fog. The wreck sits upside down in about 90 feet (27 m) of water. There’s a bit of ripping current but once you’re on the Daryaw, you can tuck in underneath and rise up into the inside — spooky and thrilling at the same time. Watch your trim and buoyancy because you’ll stir up the fine silt if you’re not careful. As for that chill, the St. Lawrence River water warms up to the high 60s or low 70s F (20 to 23 C) in the summer, so you can get away with a 5 mm wetsuit.

Kingston is on the north shore of Lake Ontario, just an hour’s drive from Brockville. Once again wrecks are the big attraction, but these are deeper and much better preserved than the Brockville wrecks. In fact, because of the cold water and the lack of any critters that eat wood, they’re astonishingly well preserved. The Katie Eccles (my favorite) sank in 1922, but is so remarkably well preserved that, as you’re descending down towards the wreck on a clear day, your imagination might see it rising from the bottom like some ghost ship from the “Pirates of the Caribbean.” The Katie Eccles is an advanced dive in deep water, where divers will have to deal with thermoclines as well as water that often changes from a relatively balmy 50 degrees F (10 C) on the surface to a brisk 40 or even 30-some degrees (3.5 to 4.5 C) at depth.

There are also a number of great intermediate-level dives in the Kingston area. Another favorite is the Wolfe Islander II, an old car ferry that was sunk intentionally as an artificial reef in 1985.  It’s 164 feet long (50 m) and sits in 80 feet (24 m) of water. There are lots of nooks and crannies to explore; if you’re with someone who knows the wreck and you’re properly certified, have them take you inside to the passenger waiting area, where you can surface in an air pocket. Jacques Cousteau called it the second best place in the world to dive. Why? This area is the aquatic world on steroids — everything is big here, from giant Pacific octopus to massive sixgill sharks, starfish the size of garbage-can lids and plumose anemones as thick as a person’s leg.  The nutrient-rich water of what’s called “The Emerald Sea” is a bubbling cauldron of life. For divers, this means an unparalleled opportunity to interact with species like wolf eels, harbor Seals or Steller’s sea lions. Photographers will enjoy an impressive concentration of macro life;  the variety, color and abundance of nudibranchs is truly astonishing.

Divers should also take their time looking for kelp crabs and shrimp lurking around on the bottom and a selection of rockfish that rivals the tropics for color. My favorite dive here is Renate’s Reef, the first place a large wolf Eel came out to play with me. Almost every dive in this part of the country is remarkable; drop into the water anywhere and you’ll see an abundance of remarkable sea life.

One bonus for diving in this part of Canada — on the trip out to the reef, divers commonly see humpbacks and orcas.

Billed as the diving capital of Canada, Tobermory is situated on Georgian Bay about four hours north of Toronto. The marine park here protects a series of wrecks, and the biggest draw is water that rivals the Caribbean for clarity — 80-foot (24 m) visibility is not uncommon. Many of the wrecks also sit in 30 or 40 feet (9 to 12 m) of water, making them safe for novice divers. Two must-sees for more advanced divers are the Arabia and the Niagara II. The Arabia, a wooden sailing ship that sank in 1884, sits in 100 feet (30 m) of water and is in remarkable shape.

A warning on this dive — it’s deep, it’s cold, and there are currents. If you’re not an advanced diver with cold-water experience, find another wreck in the park. The Niagara II is an artificial reef that was sunk in 1999. It sits between 60 and 90 feet (18 and 27 m) and offers the opportunity for lots of exploration, including the engine room and a swim through the cargo hold; divers can even try the toilet in the crew quarters. The wreck was prepared for divers, so there are lots of escape holes if you need to surface quickly, but please do not attempt penetration without proper certification.

Last, but certainly not least, is Bell Island, Newfoundland, the jewel in the Canadian diving crown. The main attractions here are four World War II cargo ships, which were sunk by German U-boats in 1942. The SS Rose Castle, SS Saganaga, PLM-27 and SS Lord Strathcona were all loading iron ore from the local mine when U-boats snuck into the anchorage and torpedoed them, resulting in the deaths of more than 40 men.

The results of those battles now sit on the bottom of Conception Bay. The wrecks vary in depth from the Saganaga at 60 feet (18 m) to the more-challenging Rose Castle at 110-plus feet (33.5 m). They’re adorned with a healthy growth of sea life and, when the light is right, it often looks as if you’re descending onto a coral reef. The ships’ deck guns are still intact, and it’s still possible to find boxes of bullets scattered around. Look for some of the oddest sea creatures you’ll ever encounter — the ocean pout, an eel-like ray-finned fish, and the lumpfish. Also be on the lookout for lion’s mane jellyfish, large and beautiful, but they pack a powerful sting.

Contrary to assumption, the best time to dive in Canada isn’t always in the summer. Some of the best dive sites in Canada are better when it’s cold. Brockville, Kingston and Tobermory are all best during the summer, yes, but Barkley Sound makes for much better winter diving — the water isn’t much colder but the visibility is often better because there’s less organic material in the water. Although the water is considerably colder, Bell Island is best during the spring and fall when the visibility is better. Yes, the water is cold, but with the proper exposure protection you’ll see everything from prehistoric sharks to wrecks that are hundreds of years old — and you’ll stay warm while doing it. 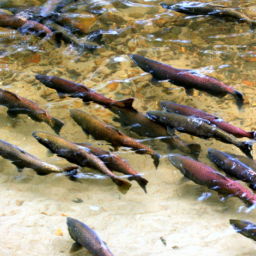