As a hedonistic scuba junkie, Vancouver qualifies as pretty much my perfect city. Within 30 to 40 minutes of the downtown core are a huge variety of world-class dives, all of which leave me lots of time to make it back to the city each day to enjoy fine dining, great entertainment and 5-star hotels. What’s more, I’ve been diving the area since the late 80s. I’ve put in dozens of dives around Vancouver and Howe Sound and I’ve yet to exhaust the possibilities. And the best part is that it needn’t be expensive to enjoy Vancouver diving. If you’re willing to put in a little effort, you’ll find plenty of great shore dives that cost you nothing but the time it takes to explore. With that said, here are a few of the best Vancouver dive sites.

This is the must-do Vancouver shore dive, just around the corner from Horseshoe Bay, where ferries depart for Vancouver Island. Drive time from downtown is about 20 minutes, depending on traffic. So far I’ve found three separate dives here, all staged from the same location. Local divers do a lot of training at Whytecliff, so don’t be surprised to see groups doing their basic open-water certification. Regardless of traffic on the surface, I’ve never felt crowded once I descend. Once you get down to the main bay, you can break right or left. Each way takes you along the shore and out to deeper water, where you’ll find some nice walls and drop offs. You can also enter the water at a smaller, separate bay a little west of the main park and work your way back to Whytecliff.

I’ve seen virtually every critter imaginable over the years at this spot, including the occasional harbor seal and giant Pacific octopus. Keep close tabs on your gauges, as although much of the diving is in the 40 to 60-foot (12 to 18 m) range, heading out past Whyte Islet or the Day Marker can put you in 200 feet (61 m) very quickly.

I’m not sure that everyone would agree that this is one of the best Vancouver dive sites, but for a few reasons I really enjoyed diving this wreck. It’s actually the remains of an old minesweeper, the HMCS Cranbrook. After the war, it was re-designated as Vancouver Tugboat 100. In the late 1950s, someone started a fire on board and the boat burned and sank in Indian Arm. These days, VT-100 is an easily accessible shore dive. It actually took my buddy and I a few dives to find the wreck. We swam past it in bad visibility on our first attempt.

When we returned the next day, we found it with no problem just a few hundred feet off shore in about 40 to 50 feet of water. The wreck has seen better days, but we took our time looking around and found an abundance of white nudibranchs crawling along the rusted metal parts of the ship. Lots of sea perch were hanging around and, on the sandy bottom, were lots of Dungeness crabs and flounder. We also saw (and nearly swam into) a few large red jellyfish — beautiful, but steer clear. The drive time to this site from downtown is about 40 minutes.

I count my two dives at Porteau Cove as among the most enjoyable I’ve ever done in the Vancouver area. The long surface swim out to the main diving area wasn’t high on my list of “must do again,” but the work I put into the dive was more than rewarded in terms of what I saw when I finally submerged. The area is a marine park and, over the years, three artificial reefs have been scattered around the bottom. Depths range from 30 to 90 feet (10 to 28 m). This has resulted in one of the most impressive arrays of Pacific Northwest sea life I’ve ever encountered.

Massive lingcod lay casually about on most every outcropping. These fish, between three and four feet long, were not the least bit shy. They’d grudgingly move when I got within a few inches, but up to that point they were quite content to give me a contemptuous stare and try to ignore my presence. There was also a healthy collection of various rockfish. My favorite, the copper rockfish, looks like it belongs on a coral reef. Of course there’s the usual collection of plumose anemones and starfish, but if you take some time checking out the pylons, you’ll also find dainty little decorator crabs. I put in two dives and still made it back to Vancouver for dinner at a new brewpub.

If you’re less enthusiastic about shore diving, don’t despair. For a modest sum, you can jump on a charter boat out of Horseshoe Bay and explore some really amazing walls a little further away from downtown Vancouver in Howe Sound.

We dove both the north and south ends of the island, both in about 80 feet (24 m) of water.  The bottom terrain on the south end really stood out. We dropped down into a lovely channel in the rock that took us out to an impressive drop-off. Just as we reached the edge, a large wolf eel swam slowly out from its den toward us, and then turned and disappeared over the wall. There were lots of sea urchins on the bottom — probably why the wolf eel hangs out there — so watch where you touch down.

This very nice finger reef starts in about 10 feet (3 m) of water and hits close to 80 feet (24 m) by the time it peters out. The Sea Dragon charter boat dropped us off at the deep end of the reef and after heading to the bottom, we had a nice, slow swim up to the shallow water. This dive is dependent on the tidal conditions, as the current can be brutal if the tide is at full flood or ebb.  Highlights include some nice tubeworms feeding in the gentle current, lots of sponges and a surprising variety of nudibranchs.

The charter dropped us off fairly close to the edge of the island and we descended right away to a very deep wall. We leveled off at about 80 feet (24 m), and there seemed to be endless darkness beneath us. One spot that positively bloomed with massive numbers of plumose anemones, as if the wall were covered a gently swaying aquatic cloud. We also spotted a nice clump of rare glass sponges. These live mostly in deeper water, but you’ll find the odd colony along the walls of Howe Sound.

When it comes to the best Vancouver dive sites, you’ll find a nicely balanced underwater experience. You can play around in a variety of depths, work your way along walls, or explore underwater peaks. You’ll never run out of options. With another trip planned next year, stay tuned for more. 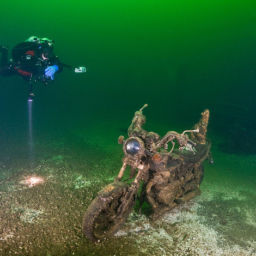 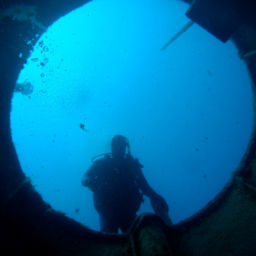