National marine sanctuaries protect some of the most spectacular ocean and Great Lakes resources in the United States, including shipwrecks like the USS Monitor.

National marine sanctuaries protect some of the most spectacular ocean and Great Lakes resources in the United States, including shipwrecks like the USS Monitor. Quietly resting at the bottom of the Atlantic Ocean, in an area called the “Graveyard of the Atlantic,” lies a Civil War ironclad, affectionately known as the “cheese box on a raft.” The USS Monitor was born to a nation in turmoil as the Civil War ravaged our country.

The history of the USS Monitor

Invertebrates live on Monitor’s hull, while fish swim around it. (Photo credit: NOAA)

The USS Monitor played a decisive role in the Civil War. (Photo courtesy of Library of Congress)

In 1973, the scientific team aboard the R/V Eastward lowered a light and a camera over a wreck site that was thought to be the USS Monitor. The wreck’s identity was confirmed by divers in 1974. (Photo credit: NOAA, Monitor Collection)

Constructed by the Union in response to the Confederate Navy’s CSS Virginia, Monitor’s mission was straightforward: save the Union. And on March 9, 1862, for the first time in history, iron met iron in the waters of Hampton Roads, Virginia. Neither ship won the battle, although both claimed victory. But their fight changed Naval warfare forever.

On New Year’s Eve, 1862, the USS Rhode Island towed Monitor to Beaufort, North Carolina. A violent storm hit and Monitor began to take on water. The captain ordered the crew to abandon ship. Shortly after midnight the ship sank to its watery grave, just 16 miles south-southeast of Cape Hatteras, taking 16 men down with it.

For over a hundred years Monitor’s location was unknown. Then, in 1973, a team of scientists from Duke University Marine Lab used side-scan sonar to discover the famed ship. Once the site was confirmed in 1974 as the USS Monitor, Congress designated it as our nation’s first national marine sanctuary on January 30, 1975, ensuring its protection and preservation for all generations.

Divers explore the captain’s quarters of the wreck of the USS Monitor. (Photo credit: NOAA)

Within Monitor National Marine Sanctuary, Monitor sits about 235 feet below the ocean’s surface. The warm Gulf Stream Current dominates the sanctuary’s waters, interacting dynamically with the cold, southerly-flowing Labrador Current. This interaction creates unpredictable eddies and rapidly changing weather conditions. This makes the Monitor a difficult dive for even the most experienced technical divers. Currents can shift quickly and water temperatures can plummet from 75 degrees to 60 degrees (24 to 15 C) in just minutes. Depending on conditions, visibility also varies from zero to 100 feet (30 m).

A unique feature of the wreck site is the paint-like color of the water when the two currents intertwine. The Gulf Stream waters are a beautiful blue, and the Labrador Current is an exceptional green. When the two begin to mix, it can appear as if an artist is mixing her paints.

Descent to the bottom only takes a few minutes, but with the unpredictable, multi-layered currents, divers can be twisted and turned in all directions. When coupled with poor visibility, it can be extremely difficult to locate the wreck. Sometimes the only way for a diver to find the ship is to follow the fish. When a diver arrives near Monitor, curious fish swim away from the wreck, the only oasis in the area, to investigate who has invaded their territory, thus helping divers to locate the wreck. However, conditions can sometimes be extremely adverse. After spending several minutes searching for the wreck to no avail, divers must sometimes abort and begin their ascent.

Despite the challenges, the experience that awaits those who dive the Monitor is unforgettable. The wreck offers a unique window into the past, giving divers a glimpse at the Civil War and our nation’s naval heritage. Divers often say that, at first sight of Monitor, they have an overwhelming sense of reverence for the ship as they remember it is a war grave, honoring the men who died that night in 1862 while defending our nation. As they explore the shipwreck from bow to stern, they also have a great sense of awe for the natural beauty that abounds.

The presence of the Gulf Stream and the wreck’s location near the northern boundary of tropical reef fish habitat creates a beautiful underwater environment for divers, filled with abundant and diverse marine life. From the surface to the bottom, the sanctuary experiences seasonal migrations of cetaceans, sea turtles, and fish, including sharks and manta rays. Temperate and subtropical fish are prevalent, and the most abundant species are the greater amberjack, black sea bass, bank sea bass, scup, and grouper. Divers will also find crabs, brittle stars, sea urchins, spiny lobsters, tree coral, whip coral, sea anemones, tube worms, oysters, sponges, and a host of other organisms. As an artificial reef, Monitor also provides winter habitat for loggerhead sea turtles and it has, unfortunately, become a home to invasive lionfish.

Since its discovery, hundreds of scientific dives have been made on Monitor to conduct research and to recover various components of the ship for conservation. In addition, over 100 recreational divers have visited the Monitor. The sanctuary’s research coordinator and maritime archaeologist, Tane Casserley, has logged more time on Monitor than any other diver — a whopping 81 dives.

Casserley joined the sanctuary team in 1999. Through the years, he has assisted with all the expeditions as NOAA and partners worked to recover some of the most historical and iconic features of the ship, including the steam engine, condenser, propeller, and turret.

“Diving on Monitor is an incredible experience,” says Casserley.

“I’m always awestruck by its past, but diving on the shipwreck I’m struck by its contribution to the present. Its armor belt and iron hull have now become home to diverse species of marine life. The wreck is a literal oasis of life in a desert seafloor. No matter if you love diving for history or for the fish that call the wreck home, Monitor has something for everyone.”

If you’re a qualified technical diver and you’d like to visit Monitor, you must first obtain a permit. The permitting process is simple and free, and turnaround time is only a few days. For more information and to apply for a permit, visit our website. This year, Scuba Diver Life is partnering with the National Oceanic and Atmospheric Administration (NOAA) to bring you images and stories from each of the United States’ 11 dive-able marine sanctuaries. This month, we’ll visit Monitor National Marine Sanctuary. 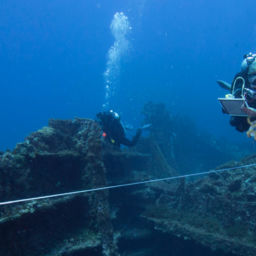 National marine sanctuaries protect some of the most spectacular ocean and Great Lakes resources in the United States, including shipwrecks like the Dixie Arrow. This year, Scuba Diver Life and NOAA are partnering to profile 12 different ships in the Graveyard of the Atlantic. This month we’ll visit the Ashkhabad. 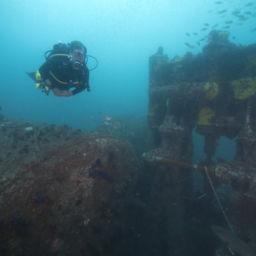 This year, Scuba Diver Life and NOAA are partnering to profile 12 different ships in the Graveyard of the Atlantic. This month we’ll visit the Caribsea. This year, Scuba Diver Life and NOAA are partnering to profile 12 different ships in the Graveyard of the Atlantic. This month we’ll visit the E. M. Clark. This year, Scuba Diver Life and NOAA are partnering to profile 12 different ships in the Graveyard of the Atlantic. This month we’ll visit the HMT Bedfordshire. This year, Scuba Diver Life and NOAA are partnering to profile 12 different ships in the Graveyard of the Atlantic. This month we visit the F.W. Abrams. This year, Scuba Diver Life and NOAA are partnering to profile 12 different ships in the Graveyard of the Atlantic. This month we visit the U-352 This year, Scuba Diver Life and NOAA are partnering to profile 12 different ships in the Graveyard of the Atlantic. This month we visit the U-85. This year, Scuba Diver Life and NOAA are partnering to profile 12 different ships in the Graveyard of the Atlantic. This month we visit the Tamaulipas. This year, Scuba Diver Life and NOAA are partnering to profile 12 different ships in the Graveyard of the Atlantic. This month we visit U-701. This year, Scuba Diver Life and NOAA are partnering to profile 12 different ships in the Graveyard of the Atlantic. This month we visit the W.E. Hutton.