Macro diving—searching for the some of the ocean’s smallest critters—is one of diving’s greatest pleasures. One of the main attractions is how incredibly bizarre and unique macro life can be. From cute seahorses to shrimp with elaborate headpieces, macro diving can reveal some of the world’s weirdest animals. And if you’re looking for the world’s widest array of tiny ocean weirdos, you won’t do better than the macro diving in Lembeh Strait, Sulawesi, Indonesia.

The stars of the show

Whenever you hear people talk about must-sees when macro diving, one name pops up in nearly every conversation: the scorpionfish known as rhinopias. This type of fish appears in a range of different sizes and colors, all of which are utterly magnificent. Spending its life as an ambush predator on the ocean floor, rhinopias blends in well with its surroundings, waiting patiently for small animals to stray a little bit too close. Once in range, the rhinopias quickly snaps up the unfortunate critter with an all-encompassing gulp.

Another favorite of macro enthusiasts is the frogfish, a type of anglerfish. Frogfish are the not too distant cousins of the aforementioned rhinopias. They too spend most of their lives on the ocean floor, consuming prey with giant gulps. However, instead of lookin magnificent, divers often describe them as being so ugly they’re cute. Often covered in wart-like patterns or streaming ‘hair,’ their laser focus on their prey will make you glad you’re not a tiny edible fish. Because they’re an anglerfish, frogfish also have a small lure atop their heads, which they flop back and forth in order to catch unsuspecting prey, much like a fisherman—hence their name.

One of the cutest macro stars is the pygmy seahorse, which photographers often covet as the ultimate macro subject. These tiny seahorses average around 1-2 centimeters, and they’re well worth seeking out, usually with the eyes of a seasoned guide. Living among amazingly vibrant fan corals, which they match almost perfectly, pygmy seahorses can be extremely hard to spot. When viewing them or trying to take a photo just remember that you can easily stress the coral polyps that they live among, not to mention the seahorses themselves, so remember not to touch and to be gentle and kind.

The flamboyant cuttlefish is another lesser known—but just as incredible—highlight of macro diving in Lembeh Strait. With vivid pink and purple displays that ripple across their tiny cephalopod bodies, they are absolutely stunning to behold. Go at the right time of year and you may even be lucky enough to see a few babies still encased in their eggs.

When macro diving in Lembeh Strait, bringing a camera is definitely top of the list. And one of the best things about macro photography is that you don’t need a fancy camera or enormous lights to get a decent shot of your favorite critter. Using the in-built flash or a small torch will give most modern point-and-shoot cameras enough light. Be warned however that you may develop an addiction to underwater photography.

It’s also a good idea to bring a muck stick, whether you’re a photographer or not. These skinny metal sticks are not meant to poke or prod animals, but rather to allow you to remain still on the sandy seafloor when observing a sea creature. Without them divers often risk bumping into delicate corals or crushing unsuspecting animals with their fins while trying to maneuver. When used correctly, these sticks help protect the delicate ecosystem. Diving Indonesia on the Damai II

You might think that after 11 days spent on the luxurious Damai II liveaboard in Indonesia visiting Alor and Komodo we’d be ready for dry land. You’d be wrong.

Along with the luxurious land-based operation, Wakatobi Dive Resort operates the Pelagian, a luxury dive yacht that cruises broader areas of the Wakatobi archipelago and the southern part of Buton Island.

That the diving at Wakatobi in southeastern Sulawesi, Indonesia, is amazing will come as news to no one. Here’s a quick peek at our top five favorite dive sites at Wakatobi. 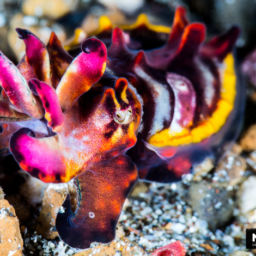 Off the northwest coast of Lombok in Indonesia are the three tiny Gili Islands, a small archipelago that includes Gili Air, closest to the mainland. Right off the beach on Gili Air, the harbor’s house reef offers an incredible night dive.

Night Dives in The Zoo at Wakatobi

It’s easy to see how The Zoo at Wakatobi got its name. Just minutes from the resort, this exceptional dive site offers a staggering diversity of marine life.

Diving on the Pelagian

Divers don’t need an expedition vessel to explore the most pristine reefs in the Indian Ocean. They can now hop on Wakatobi Resort’s resident liveaboard, the Pelagian.

All the Best of Wakatobi

With access to 43 documented sites, Wakatobi Dive Resort offers unparalleled diving in Southeastern Sulawesi. Here are a few of the best.

Those who love muck diving and searching for wacky, weird critters should put scuba diving in Ambon, Indonesia on their bucket list.

Why Wakatobi: A Dozen Reasons You Should Visit Today

After seeing underwater images snapped at Wakatobi Dive Resort, you won’t need more than one reason to visit. But just in case, here are 11 more reasons Wakatobi should be on your bucket list.

Wakatobi Resort in Sulawesi, Indonesia, is dedicated to preserving the marine environment with the buy-in and participation of locals.

Scuba Diving in Indonesia is a Dream Come True

Scuba diving in Indonesia is world-renowned as some of the planet’s best. And this lucky writer just got to see it for herself.

Top of the Reef at Wakatobi Dive Resort

At Wakatobi Dive Resort, the shallows aren’t just for off-gassing or a safety stop. Divers on these sites can (and will want to) stretch bottom times well past an hour.