On a highlight reel of diving in the Galapagos Islands, Darwin and Wolf Islands would be the undisputed stars. Unreachable except via liveaboard, these two legendary dive spots surpass even their fabled reputation. After two days at each onboard the Galapagos Master and a total of 15 dives, I finally know what all the fuss is about.

After a morning spent touring North Seymour Island and an afternoon dive at Mosquera, we begin the long overnight journey to Darwin and Wolf. Sitting at the far northwest of the archipelago, Wolf Island is about 173 miles (278 km) from Santa Cruz, the most heavily populated island in the chain. Darwin Island, our first stop, is a little further at 197 miles (317 km) away. Both these tiny rocks are completely uninhabited, and completely unreachable except via liveaboard. And even better, all the liveaboards in the Galapagos (there are only eight or nine in total), take turns visiting, so you’ll always be the only boat at the sites.

The smaller of the two islands, tiny Darwin measures just .46 square miles (1.2 square km). Striated sand-colored cliffs rise out of the water, home to swooping, wailing frigate birds and their nests. We’re not here for Darwin Island itself, though. There’s really only one dive site — but not to worry — we really only need one. The unmistakable Darwin’s Arch is like nature’s version of the Eiffel Tower; even if you’ve never been, you’ll surely recognize its iconic visage.

Sitting less than a mile off the shore of the island, we’ll dive the arch over and over on our visit. Each dive starts out the same. We ride the pangas in groups of six out to the front of the arch, near the surge but not too close, and all backroll into the choppy water as one. We must make a speedy negative entry to avoid being swept off the site by the ever-present currents. “If you decide to go neutrally buoyant the ocean is going to take you out and take you out big-time,” says our dive guide Ruly Menoscal before our first dive.

He tells us that we needn’t go deep, only to about 60 feet (18 m) and that we needn’t move around a lot either. “If the activity is high, you don’t need to do much,” he says. “The hammerheads will come to you. All you need to do is turn on your camera.”

After our descent to the rocky slope below, we each tuck in behind a boulder, holding onto the barnacle-covered to keep from being swept away. It’s like an underwater amphitheater, with each diver occupying his seat as we all stare out to the stage before us, waiting for the show to start.

On dive after dive, we needn’t wait long — the curtain goes up as soon as we settle in. The explosion of life before us is hard to believe. Dozens of hammerheads face into the current just a few feet away, slowly undulating to hold their place. Among them are silky sharks, larger Galapagos sharks, countless clouds of reef fish and more green turtles than I’ve ever seen before on one dive — perhaps in my life. Turtles cruise by at a rate of a few per minute, so many that at one point I must duck to avoid getting clipped by one passing above my head. After about 30 minutes of hanging onto the rocks, Ruly gives the signal to let go and rise up, where we drift in among the sharks.

Our second dive is much the same, except for one superstar visitor: about 15 minutes into the dive, a small-ish whale shark swims by, not 20 feet (6 m) away from the divers. We all stare, google-eyed and yelling ecstatically into our regulators. Once we let go and begin to drift in the blue, it happens again, only this one’s a lot bigger and we’re right next to it. Again, I’ve got to duck to avoid touching the gentle giant’s belly as it passes right overhead. We surface, overjoyed, and feeling incredibly lucky since whale-shark season doesn’t technically begin until June and we’re here in May. We dive five more times on Darwin’s Arch and the star of the show appears at least twice more. As we get underway, I think nothing could equal the last two days — until we arrive at Wolf Island.

The iconic Darwin’s Arch is home to one of the world’s most famous dive sites. Photo credit: Daniel Norwood

Walls of hammerheads are common at Wolf Island, although you’ll likely see at least a few on every dive at both sites. Photo credit: Nadia Aly

The isolated nature of Darwin’s Arch and Wolf Island means you’ll have these glorious dive sites all to yourself. Photo credit: Marcel Wilpernig

A whale shark seen from below at Darwin’s Arch. Photo credit: Nadia Aly

Whale sharks are common at Darwin’s Arch each year from June through November. We were lucky to see three on one dive in April, however. Photo credit: Nadia Aly

Of the two dive sites, Darwin’s Arch is assuredly the more photogenic, at least topside, and rightly famous for whale-shark action. But rather than being an understudy in this production, I find Wolf Island to equal — if not surpass —Darwin when it comes to sheer underwater amazement.

Uninhabited Wolf Island is just marginally larger than Darwin at .5 square miles (1.3 square kilometers), but here there are at least five dive sites to choose from. The underwater topography resembles Darwin’s Arch, as does the dive profile. We backroll off the panga and complete a quick negative entry to the rocks below. Again, we tuck in between them to hide from the current and surge, holding onto barnacles for purchase. Where Darwin’s Arch is famous for whale sharks, Wolf Island wins for the equally quintessential Galapagos encounter: the ‘wall’ of hammerhead sharks. Divers tuck into the rocks and watch the blue, just as at the arch, but here it’s possible to look out and see hundreds of hammerheads at once, all facing into the current and slowly, slowly making their way past.

We eagerly jump in for our first dive at Shark Bay — and unlike many other dive sites named for an animal that never seems to appear — there are plentiful sharks on hand. We spot around 20 hammerheads, as well as Galapagos and silky sharks. The gang’s all here, but not in the numbers we’d hoped for. Bumphead parrotfish and dozens of moray eels appear as well — visitors that anywhere else would leave us agog elicit decidedly less enthusiasm in the Galapagos. But it’s not until the next day that Wolf really shows us what it’s got.

Early in the morning we dip into what the dive guides are calling “Red-lipped batfish bay” to search for these odd-looking creatures with distinctive, pouty red lips. They’re quite small and, other than their flashy lips, quite drab, blending in with the sandy bottom. We cruise along in about 70 chilly feet (21 m) of water, watching for them to scoot along on their pectoral fins, which they use more like arms. We spot three before the dive is over and it’s time for another dive at Shark Bay.

Although yesterday’s dive here was no doubt fantastic, it absolutely pales to what’s in store for us on our second day. We descend quickly in a raging current, quickly making our way to the hidey holes in the rocks. The current is so strong that smaller fish hide along with us and dozens upon dozens of turtles struggle to make any headway. After about 20 minutes, we make our way to a small pinnacle in the middle of the oncoming rush.

We each find a handhold and wave like flags as life of all kinds flies by — hammers, Galapagos sharks, silkies, a tornado of schooling bonito. When we let go and make our way back to the rocks, the dive ends at a shallow turtle-cleaning station, where three sleeping turtles rock in the surge atop the flat bommie, about 12 feet from the surface, as tiny fish pick off parasites. It’s a safety stop we never want to end.

The dive guides have our final Wolf Island dive planned for a cave, but the whole group lobbies hard for another visit to Shark Bay — and it’s even more spectacular than the last. The current rages so hard that the wall of sharks before us can hardly move, clearly working hard to maintain their position on the fishy highway. Turtles have given up, drifting by with the flow. Once we, too, decide to just let go, we rise and rocket out into the blue — and straight into the wall of hammerheads.

No longer spectators watching the movie, we’re now a part of it. Hundreds of sharks swim all around us, above us, underneath us, to our left and to our right. They part like a curtain as the current carries us away. The divers ascend, euphoric after a dive that everyone immediately counts as one of the best in their life.

After four exceptional days at Darwin and Wolf Islands, it’s time to move on — the rest of the Galapagos awaits. 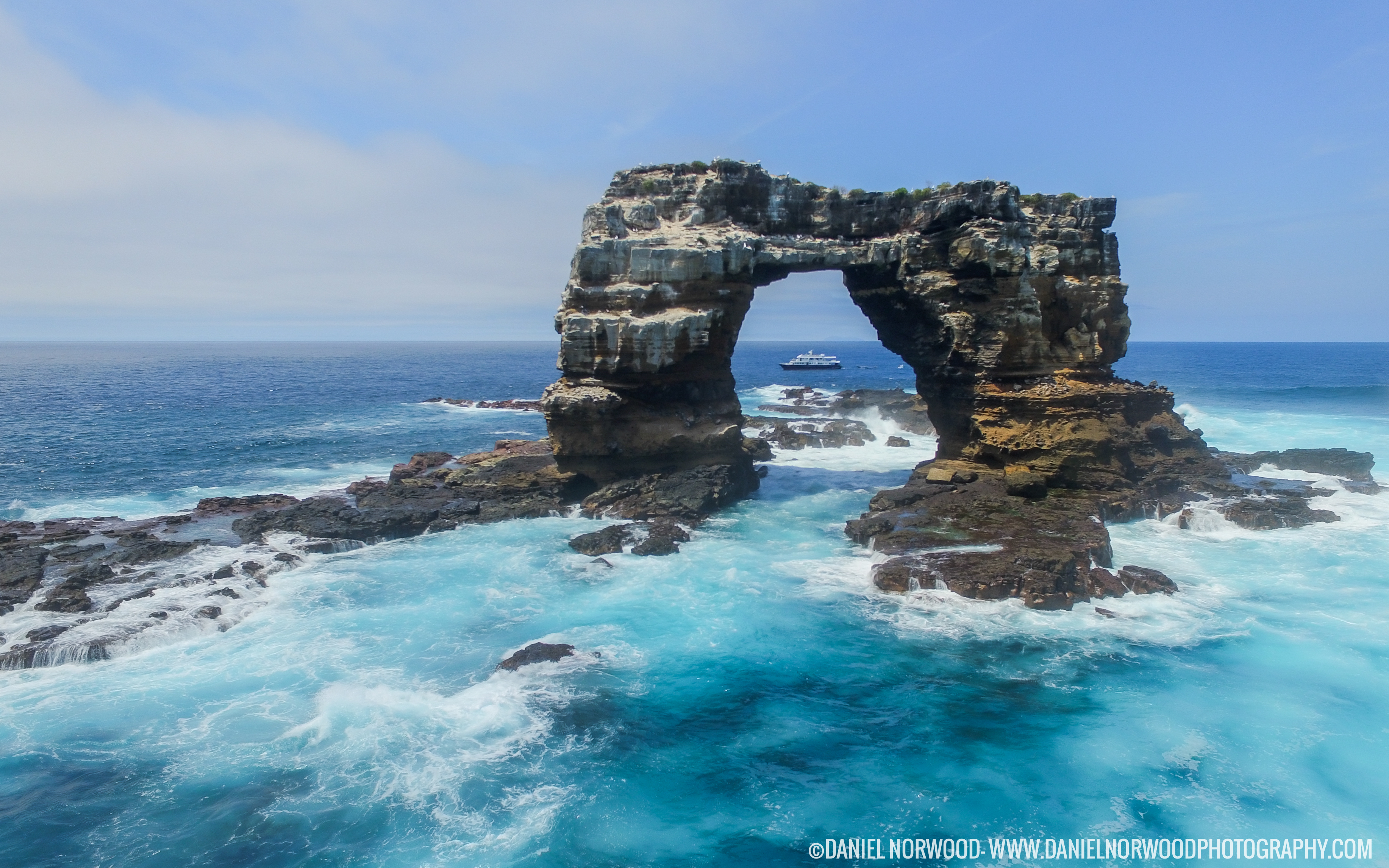