Although they’ve got a bad reputation, it’s perfectly safe to swim with jellyfish at a few places in the world. Kakaban Island in Indonesia’s Derawan Archipelago holds one of these marine lakes, populated by thousands of stingless jellies. Visitors don snorkel gear and slide into an ethereal scene.

Arriving by small boat at Kakaban after an hour bouncing in the waves from Derawan Island, I pondered what would happen if we didn’t see a single jellyfish. Traipsing along the wooden walkway through the trees and climbing up to the marine lake, I considered the opposite: what if we see lots of jellyfish? As I looked out across the lake, I could see more jellyfish than wildflowers in a spring meadow. Trepidation flowed through my veins.

Swimming in a sea of jellyfish (literally)

Before our journey deep into Kalimantan, Indonesia, I had never heard of stingless jellyfish. I only knew that I was terrified after a man-of-war sent a snorkeler I knew to the hospital in the Florida Keys. Fun fact: the man-of-war isn’t actually a jellyfish. I was afraid, but I learned something new in Kakaban. With no natural predators, the jellies here had evolved to become stingless, and therefore harmless to snorkelers. If jellyfish can evolve, I thought, can I?

Sanusi, our guide, beckoned me to jump in. With a deep breath, I gently lowered myself into the water and slowly swam toward the center. Despite my fears, it was sublime. I tried not to brush up against any of the miraculous moon jellies but there were too many. At some points it felt like swimming in Jell-O. They were everywhere.

Visitors don’t need to fear stings from the jellyfish when the enter the water. They are harmless to humans and swimming with them is an incredible experienc

After arriving at Kakaban Island by boat from Derawan Island, Indonesia, visitors followed the wooden path through the trees and up the steps.

Visitors don’t need to fear stings from the jellyfish when the enter the water. They are harmless to humans and swimming with them is an incredible experienc

After walking in the woods, you’ll arrive at this pier, the entry point for the Kakaban jellyfish lake.

On that trip, I learned of another colony of stingless jellyfish. I was ready for my next quest — Jellyfish Lake in the Rock Islands of Palau. This time the gentle boat ride left us on a dock with a bucket for rinsing our feet and snorkel gear. We climbed a steep slope up and down to reach the marine lake. I felt a bit of disappointment when I saw only one or two jellyfish at first. I knew, however, that they migrate across the lake as the day progresses. They follow the line of the sun so that the algae they carry can produce food for them both.

As I swam toward the center and the sunlight, I was engulfed in a fog of nearly transparent creatures. Unfortunately, due to El Niño and severe drought in 2015 and 2016, most of the jellyfish in Jellyfish Lake have disappeared. Although you can still hike around it, the lake remains closed to snorkelers, although Palau officials are hopeful that populations will rebound.

Why don’t they sting?

I was inspired to understand how these creatures changed from stinging their dinner to a symbiotic relationship with zooxanthellae, which provide food from photosynthesis in exchange for the jellyfish moving them into the sun each day. I questioned Michael Dawson, a professor of evolutionary biology at UC-Merced. He’s proposed that scientists reclassify the golden jellyfish I swam with, Mastigias cf. papua etpisoni, as a subspecies of the spotted jellyfish living in the nearby lagoons because they’re so different.

Professor Dawson explained that the number of jellyfish in the lake varies from zero to 30 million. The jellies I swam with at Kakaban Island were likely a combination of several types: Mastigias, Aurelia, Cassiopea and Tripedalia.

“By studying the marine lakes, we hope to learn about the interplay of the mechanisms of evolution and the outcomes, the rates of evolution, and how evolutionary and ecological processes interact in community assembly and dynamics,” said Dawson. Both the Palau and Indonesia jellyfish colonies developed in a closed environment of a marine lake.

The future of Jellyfish Lake

For now, as mentioned, snorkelers cannot visit Jellyfish Lake. But is tourism in general good for the jellyfish? This is a key management question for Palau, which needs the economic boost that tourism provides without destroying the attraction with overuse. Egan Mayer, head of the Rock Island Rangers, and I discussed the current situation and what they can do to protect the jellyfish. We discussed not only the impact of fins on jellyfish, but also whether or not cleaning your snorkeling gear might help prevent invasive species. Mayer hopes to help produce a new introductory film for tourists and foreign guides as a reminder that the area is sensitive, and that our presence impacts the creatures. In the meantime, those who want to swim with jellyfish can still do so in Indonesia — safely and enjoyably. 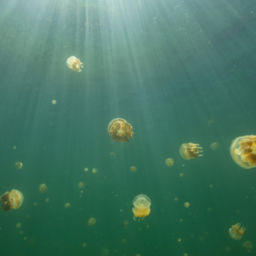