After vanishing two years ago, the jellyfish of Palau’s famous Jellyfish Lake are recovering. In November 2018, the Coral Reef Research Foundation (CRRF) of Palau reported nearly one million golden jellyfish had returned so far. CRRF has been monitoring the lake annually for 15 years and monthly since their disappearance in 2016. The population can fluctuate quite a bit. However, there are typically around 5 million jellyfish in the lake during its healthy periods. On a recent scouting visit, Sam’s Tours was thrilled to find that the moon jellyfish have also returned to the lake. Although we expected to see mostly smaller juvenile golden jellies, we surprisingly saw many large, robust adults as well.

Where did the jellyfish go?

During a prolonged drought in 2016 caused by an El Niño event, the golden jellyfish medusas disappeared from the lake due to abnormal water conditions, such as increased temperature and salinity. The jellyfish have two life cycles. The first is as a small, 2 mm asexual polyp living on the wall of the lake. The second is as the aforementioned and familiar medusas we see floating in the lake. Fortunately, in the polyp stage, the jellyfish are quite hardy. These were able to survive the El Niño event to produce more medusas and bring the lake back.

Jellyfish Lake is one of Palau’s primary tourist attractions. Based on its ongoing recovery, the Palau government has reopened the lake for daily tours. Visitors can once again experience this amazing place and snorkel among millions of harmless jellyfish. Both the government and tour agencies are hopeful that the lake will continue to rebound to its pre-El Niño numbers of 5 to 7 million jellyfish. 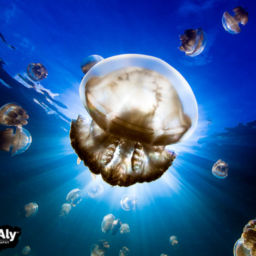