In the last of our six-part series on the world’s most dive-able wrecks, we’re highlighting the best wreck diving in Europe.

In the last of our six-part series on the world’s most dive-able wrecks, we’re highlighting the best wreck diving in Europe. (Check out our stories here on wreck diving in Asia, Africa, the Middle East, the United States and Caribbean). While divers have, unfortunately, removed or salvaged parts from some wrecks, many are still in the same condition as when they sank. Equipment, tools and everyday objects often appear frozen in time from the moment the ship down. If you’re looking to round out your warm-water wreck diving with some worthy entrants in temperate waters, look no further than our picks for the best wreck diving in Europe.

The MS Zenobia was a roll-on-roll off car ferry that capsized and sank on its maiden voyage in June 1980 with no casualties. It was carrying over 120 vehicles, many of which are still on the wreck. Experienced wreck divers can utilize many penetration points, and novice divers can cruise along the starboard side of the ship at around 50 feet (16 m).

Maximum depth is 138 feet (42 m) with the shallower parts of the dive starting at 52 feet (16 m). Water temperature ranges between 63 and 82 F (17 to 28 C) from February to August, with the main diving season falling between March and November.

The SS Excellent steamer was at anchor in 1888 in Gibraltar Bay with a cargo of fruit bound for the United States. A strong current caused it to drag anchor and the ship subsequently collided with the Saint Asaph and the Memling. It sank near the Detached Mole (a breakwater in Gibraltar Bay).

The damage from the collision is visible in the wreck’s midsection. The anchor is located near the starboard side and while the wreck is partially buried, divers can clearly see the two-cylinder steam engines, the boilers, one furnace, and a large four-bladed propeller. Penetration is possible, although visitors should take care as strong weather conditions have moved the wreck in recent years, making penetration a bit trickier and somewhat dangerous.

Part of the underwater ship cemetery of Scapa Flow, the Tabarka was one of three vessels scuttled in Burra Sound to prevent the enemy’s access Scapa Flow bay. The wreck is upside down and has multiple entry points with vibrant marine life.

Although the Tabarka only has a maximum depth of 52 feet (16 m), it is an advanced dive due to strong currents. The wreck is only accessible at slack tide. Water temperature ranges between 39 and 57 F (4 to 14 C) from April to September so a drysuit is a must.

The Pietro Orseolo was an Italian cargo vessel that transported food, weapons and tools for the Germans in WWII. It sank near Penfret Island in 1943. Some of the holds have disintegrated and many of the upper parts have been levelled, making penetration only suitable for extremely experienced wreck divers with the proper skills and training. The outside of the wreck, however, still offers much to see. A sea-fan clad propeller shaft, three caterpillar trucks, a large engine and connecting cables between the front and back of the vessel are all worth exploring.

The Pietro Orseolo sits slightly tilted toward starboard at between 56 and 100 feet (17 to 30 m). Water temperature ranges from 48 F in February to 61 F in August (9 to 16 C), so you’ll want a drysuit whenever you visit.

The Dellec is an unidentified wreck from WWII. German occupation authorities armed and positioned this 72-foot (22 m) barge to defend Brest against an Allied seaborne assault. It is unclear how it sank. The wreck is mostly intact, sitting upright on a sandy bottom. Presumably wooden, the top decking has rotted away and left the metal framework and parts of the interior exposed. There are large rolls of chain on the stern and bridge and weapon-control stations on each side of the hull. The amidships has four spectacular torpedo tubes as well. Penetration is easy due to the absence of the deck. Inside you can see large rolls of cables and wire, control panels, pipes, the crew’s washroom and the compressor used for torpedo launches.

The SS Empire Broadsword sank nearly a month after D-Day. It struck two mines and became airborne thanks to the explosion, which subsequently broke the ship’s back and sank it. The wreck sits on the starboard side. Divers can penetrate the engine room, bridge and boiler room, but strong tides, gales and the shallow depth have weakened the wreck’s structure. Outside, divers can see a huge rudder, deck guns, ammo and anti-aircraft guns. The wreck sits between 49 to 88 feet (15 to 27 m) in water ranging from 45 F in March to 66 F in August (7 to 19 C).

The SS Norfolk struck a mine while on active duty off the coast of Normandy. It then became a blockship for the American military off Omaha Beach. The wreck is upright and divers can penetrate the engine room and accommodation areas. The wreck sits between 46 and 66 feet (14 to 20 m) meters in water ranging from 45 F in March to 66 F in August (7 to 19 C).

The French Navy sank the Le Rubis submarine in 1958 as a sonar target. Divers can see the masts floating in mid-water, the compressed air cylinders used for the ship’s buoyancy inside the wreck, three trapdoors and the protrusions that held landmines while the vessel was in action. There is a platform at the front of the turret thought to be a lookout point while the ship was on the surface. In many areas the metal sheeting has decomposed, exposing the valves and pipes underneath. Divers can enter the central trapdoor but it is extremely narrow and only one person can enter at a time. Only extremely experienced and skilled divers should attempt penetration. 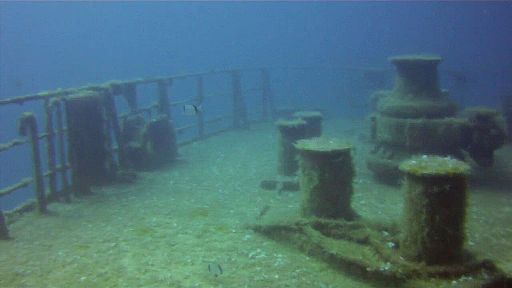 The Um El Faroud was an oil tanker from Libya. It was scuttled in 1998 to form an artificial reef off the coast of Wied Iz Zurrieq after being damaged in an explosion three years earlier. The wreck sits upright in two parts, broken by a winter storm in the 2005-2006 season. The doors and windows are gone, and entry and exit holes have been cut into the wreck for easier penetration by experienced wreck divers. Divers can find a brass memorial plate dedicated to the dockyard workers who died in the explosion that damaged the Um El Faroud on the wreck.

The Entella avoided a torpedo hit on April 10, 1943, only to become stuck on a shoal and subsequently struck and sunk by a torpedo the next day. As it was obstructing navigation for other vessels, further explosions finished the job and sank it all the way. . The wreck is mostly twisted metal and the remainder of the superstructure. The coal the ship was carrying is thickly scattered along the bottom around the wreck. Due to the damage the vessel received, lots of light penetrates the wreck, making it for underwater photographers. The wreck sits between 46 and 59 feet (14 to 18 m) in water ranging from 55 to 72 F (13 to 22 C) from February to August.