The secret is out: Pristine reefs and few crowds await in the small town of Marsa Alam in southeastern Egypt.

Until recent years, the scuba diving in Marsa Alam, Egypt was relatively unknown. This small town on the western shore of the Red Sea is poised for discovery due to pristine reefs and the lack of crowds often found at other Red Sea diving towns. Marsa Alam is by far the best spot from which to explore the southern Red Sea, appealing to experienced divers looking for challenging dives and unique wildlife experiences. Sites offer the opportunity to dive with dolphins, sea turtles, dugongs and manta rays from May through August. There are whale sharks, as well as a variety of other shark species, from May through June. While it’s best to have some experience when diving Marsa Alam, local dive sites also offer a quiet and scenic spot for dive students or those who seek less demanding dives.

The dive season is year-round, though late summer and early autumn have the warmest sea temperature: 84 F (29 C) in August compared to 73 F (23 C) in December. Given that August is also peak diving season, we recommend visiting in autumn when the area is quieter and the water temperature is still balmy. Depending on your cold tolerance, pack a 3 mm or 5 mm wetsuit, and always carry a dive knife, torch, and DSMB. Expect water visibility up to 100 feet (30 m), but make sure to ask an expert about local dive sites and sea conditions before diving unguided. With that said, here are our picks for the best diving in Marsa Alam. Where is it: This reef lies in the open ocean, a little over seven miles (12 km) from the Marsa Abu Dabbab coastline. It takes around 20 minutes to get there via Zodiac from Marsa Alam, weather permitting. It takes two hours via motorized boat from Port Ghalib.

What makes it special: This site attracts shark-seeking divers from around the world, on the hunt for oceanic whitetip and hammerhead sharks. It’s one of the world’s few remaining sites where divers can regularly see these sharks, in fact.

Details: Only experienced divers should visit Elphinstone Reef. The open-ocean site is famous for strong and ever-changing currents, deep caves and coral plateaus. A dive depth of 100 feet (30 m) is sufficient for most exploration, but there are interesting features at greater depths, such the sarcophagus archway at 170 to 213 feet (52 to 65 m), accessible only to trained technical divers.

When to go: You can see sharks year round, but they are most numerous from October to December. Where is it: These two rocky islands sit almost 44 miles (70 km) offshore from Al-Qusayr (also El Quseir), about an hour north of Marsa Alam.

What makes it special: This area has been designated as a Marine Protectorate since 1983, and is known as one of the world’s top dive locations. The islands’ sheer drop-offs offer spectacular wall diving with the opportunity to see abundant soft corals, gorgonian fans and large pelagics, such as gray reef, silky, silvertip and hammerhead sharks, tuna, jacks and the occasional thresher shark.

Details: The Brothers are for experienced divers only and the Egyptian port authorities require a minimum of 50 logged dives to be allowed access. The islands are subject to strong currents and waves, and exploration of the wrecks and reefs beyond 130 feet (40 m) is for experienced technical divers only. The Brothers can be reached by liveaboard only; boats depart regularly from Marsa Alam.

When to go: Visit at the end of spring and fall for favorable sea conditions and fewer crowds at the dive sites. What makes it special: The reef is less than a mile wide and, due to its remote location, dive boats visit less frequently than other area dive sites. It offers pristine hard and soft corals and deep walls. Hammerhead sharks are frequent visitors.

Details: Daedalus is for experienced divers only and is subject to strong currents, waves and surface swells that make the entry and exit conditions challenging. The abundance of marine life is well worth braving the elements, however, and both the eastern and western walls provide interesting drift dives. At the southern point of the reef, keep an eye out for thresher sharks. Dive depths range from 16 to 130 feet (5 to 40 m) and the reef is only accessible via liveaboard.

When to go: Accessible all year, though we recommend the end of spring and autumn as above. Where is it: You can easily reach this offshore reef and lagoon with an 80-minute boat ride from Marsa Alam.

What makes it special: This popular reef is home to a large family of approximately 60 spinner dolphins, and it’s possible to snorkel and swim with them. The reef also offers great dive sites with swim-throughs, pinnacles and coral formations.

Details: Dolphin House is suitable for non-divers and divers of all experience levels. The conditions are usually easy and there are frequent boat trips to Dolphin House from Marsa Alam. A number of operators offer day trips, and liveaboards often also visit this reef as part of their itinerary. 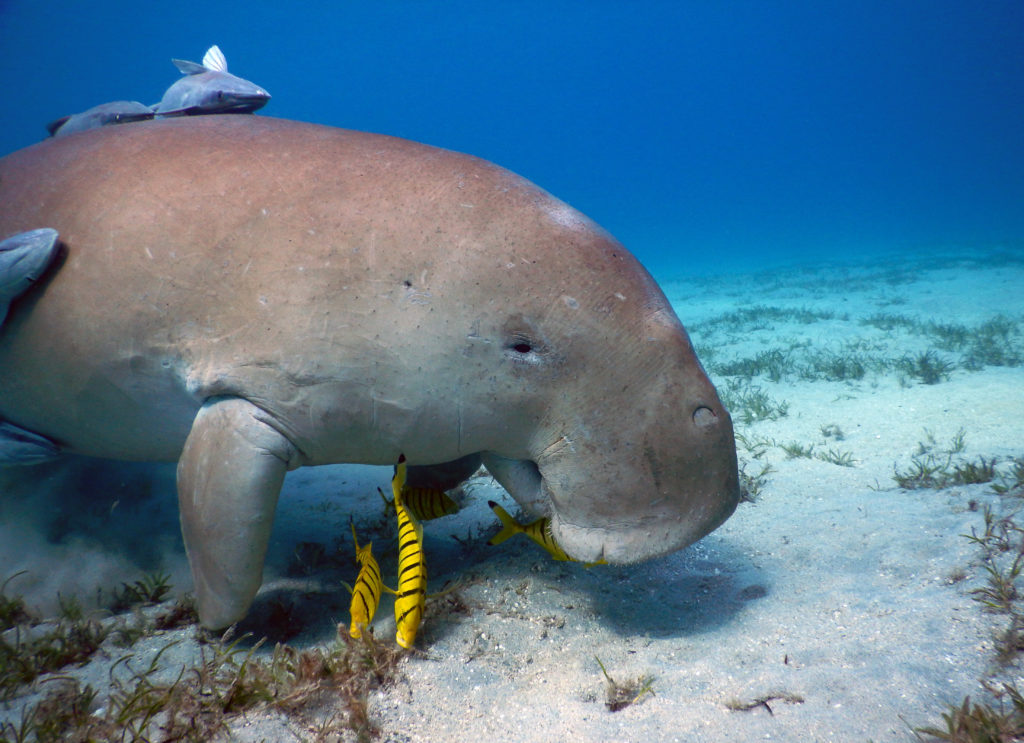 Where is it: This sandy bay area is a little over 18 miles (30 km) north of Marsa Alam.

What makes it special: This shore site is popular with divers and non-divers alike and provides colorful snorkeling and shallow diving. You’re quite likely to see sea turtles grazing the sea grass meadows. You may also see guitar sharks and the very rare and endangered dugong.

Details: Abu Dabbab is suitable for everyone from snorkelers to novice and experienced divers. Dive depths range from 13 to 60 feet (4 to 18 m), and Emperor Divers offers a half-day trip to the area. Based at the bay, Abu Dabbab Dive Lodge offers divers the chance to explore the local diving for longer periods of time. Where is it: The Hamada sank off a secluded shoreline south of Wadi El Gamal National Park in 1993. It sits 42 miles (68 km) southeast of Marsa Alam.

What makes it special: The wreck is unique in that it’s suitable for snorkelers, as well as experienced and novice divers. Qualified divers can also penetrate certain areas of the wreck. As a relatively new wreck, the masts and ropes are still intact. They are home to young corals, while the wreck itself is home to a number of species, including humphead wrasse, lionfish and moray eels.