Where to dive in Africa?

Many think of Africa as a place to see terrestrial wildlife, but few consider the waters around this vast continent for a very different type of safari.

With dive sites spanning the Atlantic and Indian Oceans and the Arabian Gulf, there are many countries in which to explore the underwater world here.

The continent is also host to passing whale migrations and sharks of all kinds in abundance. Here are just some of the best places to dive in Africa.

The Mafia archipelago consists of one large island and several smaller ones, surrounded by one of the healthiest and most diverse coral reef systems in the world. Waters are warm and clear and the area falls within a protected Marine Park. It’s a remote, natural area which hasn’t been overrun by mass tourism.

Of the many dive sites, the best is agreed to be Chole Bay – a large, circular bay with depths varying from 5 metres to 27 metres, making it ideal for beginners and its sheltered aspect suiting it to year-round diving. Here, the Kinasi Pass is home to a 12 metre coral pinnacle and hosts reef and pelagic fish, groupers, barracuda, turtles, rays and cobias.

The warm waters off Mozambique’s gorgeous 2000 kilometre-long coastline are rich in plankton, making them a feeding haven for larger creatures such as whale sharks, humpback whales and manta rays. In the north of the country, the Quirimbas Archipelago stretches between Pemba and the Tanzanian border. This is a top choice for divers because it’s recently been made home to the Primeiras and Segundas Marine protected Area. The biggest such region in Africa, it homes richly-inhabited coral reefs, mangrove forest and five species of turtles. The island of Zanzibar off the coast of Tanzania is a well-visited spot, meaning that the reef fish are accustomed to human interaction and won’t hide on your approach. Despite the area’s popularity, the dive sites are clean and relatively un-crowded, offering sights such as rare nudibranches, tropical reef fish and whale sharks which migrate past the island from August to November.

Mnemba Atoll is teeming with varieties of fish with 30-metre visibility in the best conditions. Off the northern tip of the island, Level Bank is a top choice for experienced divers. This open ocean site with its steep drop-off is awash with strong currents – a small price to pay for sightings of big game fish such as tuna, kingfish, trevally, wrasses, dolphins, turtles and moray eels. If it’s off-beat and off the beaten track you’re looking for, make your way to Malawi’s best dive site – Likoma Island. This small island in the heat of Lake Malawi – just 17 square kilometres – is home to local fishing communities and beautiful sandy beaches. Freshwater diving doesn’t get better than this: the lake boasts over 1000 species of tropical fish, a third of which can’t be found anywhere else in the world. The calm, fresh water makes it feel a bit like diving in an aquarium. 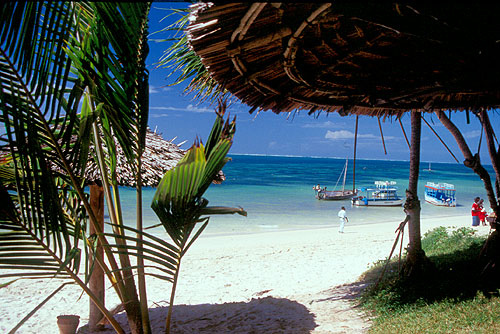 On the north coast of Kenya, the Watamu Marine National Park offers a perfect, protected environment for beginners and inexperienced divers. The waters are largely shallow with easily accessible reefs even shallow enough to see with a snorkel. Green turtles lay their eggs on the beaches here, and can often be spotted on Turtle Reef – a prime dive site. You’ll also see lots of parrot and surgeon fish here and maybe some white-tip reef sharks. Nearby Moray Reef is loved for its amazing overhang, housing eels, octopi, morays, nudibranches and angel fish.

Article courtesy of the luxury travel experts at Exsus.com, tailoring luxury adventure holidays to Africa for over 12 years.