The northern sea otter is the furry ambassador of Olympic Coast National Marine Sanctuary. With their knack for naps and holding hands as they float, their cute faces are pervasive both along the coast and on social media. But it wasn’t always this way.

From 1911 to 1969, otters were erased from Washington coastal ecosystems after being hunted during the fur trade. In 1969 and 1970, they were reintroduced to the Olympic Coast when 59 sea otters were flown down from Amchitka, Alaska. Today, 1,800 live along the Olympic coast. As the otters recolonize their former stomping grounds and scope out new territories, NOAA Nancy Foster Scholar Jessica Hale pieces together the past and present by examining otter diet.

A Ph.D. student at the University of Washington, Seattle, Hale spends her summers traversing the Olympic Peninsula. She observes otters feeding in Olympic Coast National Marine Sanctuary. Unlike other marine mammals, otters bring their prey to the surface. Perching on cliffs or sea stacks and armed with a telescope, Hale spies on otters as they forage on crabs, clams, urchins, snails — and sometimes — octopuses. She records data such as how much time they spend collecting prey underwater and resting at the surface. She also records the amount of time it takes them to eat a prey item. Using this information, she wants to understand how otter diet changes over space and time.

“My research is important because sea otters are what’s termed a ‘keystone species.’ This means that marine ecosystems with and without sea otters are really different,” Hale explains. “It’s either a single species ecosystem versus a really diverse ecosystem that includes sea otters. That’s important for me to keep in mind when looking at how reintroduced otters are impacting the sanctuary.”

In a world without otters, sea urchins would decimate kelp forests. Instead of a lush underwater forest, sandy barrens covered in sea urchins would predominate. As a keystone species, sea otters keep urchin populations in check. Kept in balance, the kelp forest ecosystem serves as vital habitat for invertebrate and fish communities, harbors fish nurseries, and protects the coast from waves and storms.

Because otters need to eat 25 percent of their body weight daily, it’s important for them to consume food that gives them the most calories possible — high-quality prey. Across the sanctuary, Hale has found that otters at newly established sites are getting more calories per minute from their prey than those at longer established sites, where otters are eating lower quality prey.

To understand how diet changes over time, Hale compares her field observations to those from the 1990s at 10 different sites in the sanctuary. “Preliminary [findings are] showing that at the same locations, they’re eating lower quality prey,” Hale says. “In general, they were eating clams in the [1990s] and now they’re eating mostly snails over the whole coast.” The longer a population remains at a site, increased competition between otters can lead to lower abundance of high-quality prey items. Therefore, she’s seen diet diversity increase at these sites as otters seek out new food sources.

Hale thinks most of these changes over time and space are driven by otters themselves. “When you think of a buffet and everything’s available to you, you’re probably going to go for your favorite foods first, before you have to move on,” Hale explains.

“It’s similar for otters. They’ll move into a new area and eat their favorite food first, which mostly happens to be urchins. They’re easy to get and have a lot of calories. As otters increase or time [goes on], they’ll deplete that prey resource and exhibit this behavior called prey switching. Based on prey abundance, they end up also adding in another type of prey — something like crabs or clams. It keeps going and going until they have really high diet diversity because they’re eating whatever they get their hands on, whereas in the beginning they can be choosy.”

Weather on the coast is a constant problem for Hale when she’s in the field. Photo courtesy of Jessica Hale

Otters and people like to eat some of the same food, like Dungeness crab, butter clams, littleneck clams, and red-rock clams. In the southern area of the sanctuary, otters are eating predominantly razor clams. As a result, they’re getting more calories than observed anywhere else — 28 kilocalories per minute. To compare, the highest observed anywhere else is 25 kilocalories per minute. It sounds like a small difference, but over the course of a day, that three-kilocalorie window widens into a chasm.

The otters’ penchant for razor clams is currently a hot topic. “Because the razor clam fishery didn’t do very well this year and sea otters are eating razor clams and have recently occupied that area, I’m giving a talk at the Olympic Coast council meeting to get ahead of this issue,” Hale says.

Helping the sanctuary managers balance the ecological contribution of a species with fisheries management may seem like a challenge for some. But it’s part of the reason Hale enjoys being involved with the sanctuary.

“The sanctuaries are important for me because they promote research and management through education and outreach,” Hale says. “People need to know that sea otters exist for them to care about them, so I rely a lot on the education work that the sanctuary does to instill in people some sense of commitment or caring about the ocean in general. I rely on that as my base for helping people understand my research.”

While she completes her Ph.D., Hale will spend summers on the Olympic Coast, tracking the expanding sea otter population. Her research will help Olympic Coast National Marine Sanctuary protect this important species and the kelp forest ecosystem otters maintain.

Yaamini Venkataraman is a social media intern at the NOAA Office of National Marine Sanctuaries and a graduate student at the University of Washington.

About the Nancy Foster Scholarship program:

NOAA’s Dr. Nancy Foster Scholarship Program provides graduate students in oceanography, marine biology, maritime archaeology, and coastal and ocean-resource management with financial support and tools for success inside and outside graduate school. The program seeks to increase the number of women and minorities in these scientific disciplines, particularly as they relate to the mission of the NOAA Office of National Marine Sanctuaries. 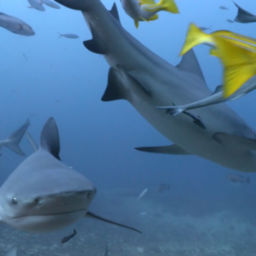