Manatee season is coming in Florida. What's the best place to interact with these gentle creatures?

Manatees are marine mammals that live in saltwater bays, estuaries, canals, coastal waters and slow-moving rivers, and are found in cool, shallow water, between 3 and 6 feet deep and averaging 68 degrees Fahrenheit.

These herbivores grow to lengths of 13 feet and weigh upwards of 1,300 pounds. They’re vegetarians, eating mostly algae, weeds and grasses. Since most of a manatee’s diet is low-calorie vegetation, they must consume 5 to 15 percent of their body weight per day to maintain their weight. In order to do so, a manatee spends 6 to 8 hours a day eating.

Manatees are robust creatures, with a flat, paddle-shaped tail capable of producing speed bursts of 15 mph. They have thick, gray skin, with the occasional algae patch growing on it. They are gentle animals; their eyes are soft and their prehensile lips, which act like an elephant’s trunk and look like an oversized pig’s snout, dominate their face.

A unique trait of manatees is their tooth replacement program. They only possess rear molars, which are routinely replaced in a process called “hind molar progression.” A manatee’s molars are forever moving slowly forward, wearing down from their extensive chewing of plant matter. Once the molars reach the front of the manatee’s jaw, they are so worn that they resemble thin plates, when they fall out.

As manatees are mammals, they have neither a swim bladder nor a fatty liver to help them maintain their buoyancy. Instead, they’ve got extra-large lungs, which double as a buoyancy control device. Manatee lungs run almost the full length of their bodies, allowing the animals to easily change depth while maintaining a perfect horizontal position.

The International Union for Conservation of Nature and Natural Resources has listed manatees as being endangered. Subsequently, these animals are under the protection of the Endangered Species Act, the Marine Mammal Protection Act and, for Florida’s West Indian manatees, the Florida Manatee Sanctuary Act, which makes it illegal to approach a Florida manatee while the animal is eating or migrating; violators can be fined up to $5,000 or receive jail time.

Even with these protections, the public can interact with these animals as long as no laws are broken in the process (i.e. do not approach, chase or harass manatees). They can display considerable curiosity, but common sense should be used during interactions. They are not known to be aggressive — quite the opposite — but these are wild animals and we are entering their environment.

One of the best places to interact with manatees in the U.S. is Crystal River, Florida. While it is possible to view manatees year-round here, November to March brings large numbers of these animals to the warm waters of the springs. There’s only one site open for scuba diving during the peak season, but snorkeling is your best bet for manatee interaction, as regulator bubbles can scare the animals away. 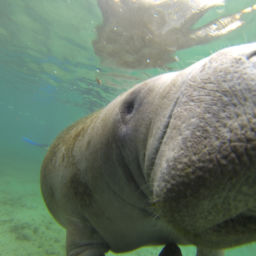