Get To Know Your Scuba Cylinder

As divers, we know that SCUBA stands for Self Contained Underwater Breathing Apparatus, but how much do you really remember about cylinders? Here’s a brief review to help you tell your aluminum from your steel and your DIN from your yoke.

What are scuba cylinders made of?

Cylinders are made either of steel or aluminum, with each having its own advantages and disadvantages.

Steel is harder than aluminum and therefore doesn’t damage as easily. It’s also heavier, meaning that divers don’t to carry as much weight. Once a diver has breathed the air out of the tank, he stays the same weight in the water, which helps with buoyancy.

Steel is prone to rusting, however, which is problematic for any piece of dive equipment, but especially for a cylinder, as you want your tank to be clean, dry and rust free to stop any potential air contamination or valve blockages.

Aluminum cylinders are lighter than steel and are also a lot less expensive. They are the most commonly used tanks at dive resorts. Because they’re lighter, they’re also widely used in technical diving, wherein divers must carry many tanks at once. Aluminum tanks are also useful for side-mount diving due to their buoyancy attributes.

However, since these tanks are a lot lighter than steel, divers must carry more weight. Also unlike steel tanks, aluminum cylinders change buoyancy from negative to positive as a diver breathes down the air, which means that the tank begins to float. Some divers may find this difficult to control.

What are cylinder valves?

Each scuba cylinder has an on/off valve, and each valve contains a “burst disk,” which is a safety feature designed to burst and release cylinder pressure if it’s overfilled or if the pressure builds due to heat expansion. Tanks also have different types of valves.

The most common is the K-valve, which has a single outlet to allow the connection of one regulator, and has no reserve function. It simply opens to allow gas to flow and closes to shut it off.

Y- and H-valves have two outlets, each with its own valve, which allows attachment of two regulators. This means that you have a failsafe — if one regulator fails or free flows, you can simply close the valve and breathe from the regulator that’s connected to the other valve.

Before the K-valve became common there was the J-valve, which had a lever that allowed the diver to pull and release the remaining air reserve if a low-on-air situation was approaching. These have since been replaced by the safer and more reliable K-valves.

What’s the difference between DIN and yoke?

Quite simply this is how you connect your regulator to your cylinder. Yoke connections are made when the regulator surrounds the valve and a seal is created against the O-ring when the cylinder is turned on and the pressure is released. A DIN connection is made when the regulator is screwed directly into the cylinder valve. It’s more reliable and secure, however it’s uncommon in many places, so an adaptor maybe required when traveling.

What do the markings stamped along the top of the tank mean?

You’ll notice that there are a lot of letters and numbers stamped onto the neck of a scuba cylinder — this isn’t a secret code meant only for dive professionals. The information contained therein is useful for you as well, from basic information about the material it’s made from to safety regulations regarding cylinder test dates.

Below is an example of the stamp on a cylinder and what each section means. 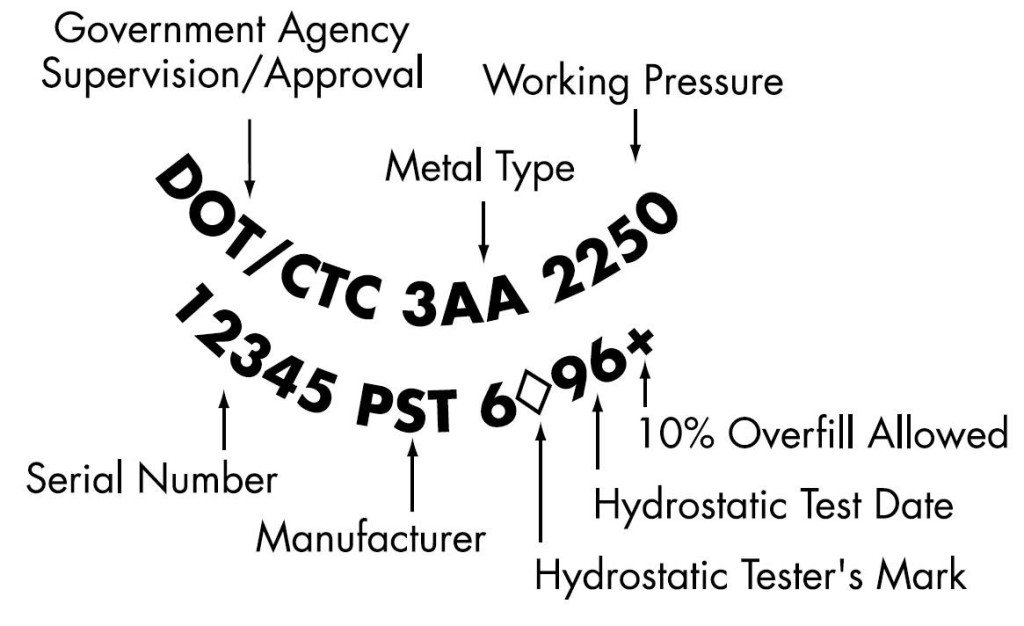 So the next time you go diving, pay some attention to your cylinder, whether it be test dates, the type of valve, or the material from which it’s made in order to adjust your weights. All the information is there, but if you’re ever unsure, never hesitate to ask a dive professional.

Diving with Blue and Mako Sharks in South Africa

You’ll cover some serious nautical miles when diving with blue and mako sharks in South Africa — but the long boat ride will be well worth it.
by Guest Author Jul 3, 2020

Conservation Spotlight: One Island One Voice

The enterprising kids who created the conservation organization Bye Bye Plastic Bags’ on Bali are at it again with One Island One Voice.
by Hélène Reynaud Jun 29, 2020

What is Scientific Diving?