Divers know Fiji as not only a shark mecca but also a soft-coral paradise. Rainbow Reef is rightly famous around the world, but Fiji offers plentiful vibrant soft-coral dives. Here are our picks for Fiji’s top five soft coral hotspots.

There are dozens of beautiful dive sites on the Rainbow Reef, but the Great White Wall is really a stand-out. The entry point is a small depression on a coral wall, with the top of the reef at around 33 feet (10 m). Soft corals of every color in the rainbow cover the top of the reef, with even more colorful fish flitting in and around them. In the overhangs and swim-throughs there are schools of big-eyes and when you peak over the edge — a wall of white soft coral that looks for all the world like a snow scene.

North Save a Tack or Keenan’s, Namena Marine Reserve

It’s impossible to pick just one soft coral site in the Namena Marine Protected Reserve. This remote destination is best reached by liveaboard, which is possibly why Fiji’s only two liveaboards are booked out months, sometimes years, in advance.

Keenan’s main feature is a narrow pinnacle covered from head to toe in colorful soft corals. At the end of the dive, you’ll spend your deco in a lush coral garden. Conversely, North Save a Tack is an adventure, beginning with pelagic encounters ranging from huge schools of barracuda to graceful manta rays before it transitions to a channel covered in the densest soft coral you’ve ever seen. Pinks, oranges, blues and blacks stretch out before you. At the end of North Save a Tack, you’ll reach the ‘Window of Dreams’ home of some of the world’s most famous underwater photographs.

Again, it’s hard to pick the best dive site in Bligh Water. All of them are good, with names to prove it — Black Magic, Breath-taker and Yellow Mellow. Wheat Fields is another beauty here, with coral bommies covered in fields of vibrant yellow soft coral that looks like…a field of wheat. Instant Replay is ablaze with color and fun drift dive with a twist. Toward the end, you can duck into a gap in the reef wall, swim back and enjoy the drift again.

Think giant sea fans — everywhere. Enormous fans made up of intricate lacework in all different colors — red, orange, yellow, green and purple — dot the Fantasea dive site. It’s like swimming through a world created by Lewis Carroll. The coral gardens are great fun to explore, with gullies and swim throughs that will make you feel like a kid again.

This Savusavu dive site features one large bommie surrounded by other smaller bommies on a clean, sandy base. Hard corals cover the main bommie, which has one steep side, also covered in soft corals and gorgonian sea fans. Anemones and bright orange anthias make this site an absolute riot of color. Fiji is known as a soft-coral paradise; most dives will live up to your expectations and more. Here’s a sampling of some of the best scuba diving in Fiji. 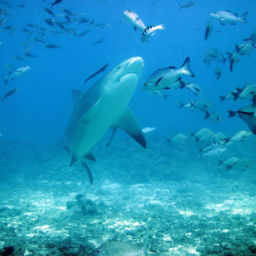 New Shark Dive in Fiji at the Yasawa Islands

There’s a new shark dive in Fiji at the Yasawa Islands, and even those on a Discover Scuba experience can participate. Fiji has a reputation as the friendliest country in the world and offers some fantastic diving. The Yasawa Islands are some of the best of the best.