The wreck of the Rhone is one of the Caribbean’s most famous, still in great condition and with an abundance of life.

If you’re planning a visit to the British Virgin Islands, whether for a dedicated dive trip or a sailing charter, your experience won’t be complete without checking out one of the most iconic dive spots in the BVI, the wreck of the RMS (Royal Mail Ship) Rhone at Salt Island.

The RMS Rhone was built in London in 1863 for the Royal Mail Steam Packet (RMSP) Company, and was, at that point, one of the most advanced vessels in the world. Only the second vessel in the world to be fitted with a bronze propeller, the ship measured 310 feet long.

From 1865 to1867 the Rhone completed six voyages to Brazil, but in 1867 the ship’s route was altered and it began to run from Southampton to the Caribbean. Steamers in the Virgin Islands typically got their coal provisions from St. Thomas, but due to a yellow-fever outbreak there, the coaling station had been moved and the RMS Rhone and RMS Conway were in Great Harbour, Peter Island as a storm approached. Both vessels had dropped anchor and as the winds grew, they began to drag, forcing the ships ever closer to the shoreline of Peter Island. The captain of the RMS Conway made the decision to unload all of that ship’s passengers to the “unsinkable” RMS Rhone and make a hasty escape to Road Town, Tortola.

As Rhone Captain Robert F. Wooley saw what he believed to be a break in the storm, he gave the orders to cut the anchor loose. Having dragged around a coral head and impossible to raise, the anchor is still in the same spot and can be seen to this day.

Wooley believed that October was too late in the year for a hurricane and made the decision to ride out the weather in open water south of Peter Island. As he made his way out of Great Harbour, however, the winds changed. He realized that what he thought was the end of the storm was, in fact, the eye of what was later to be known as the San Narciso hurricane, a Category 3 storm.

The Rhone attempted to slip through the islands of Dead Chest and Salt Island to make it to open water, but one final obstacle was in the way: Blonde Rock, a reef that pops up to as little as 15 feet below the surface, sits half way between the two islands. In an effort to avoid it, Wooley gave the reef a wide birth and passed close to Salt Island. The ever-strengthening wind pushed the ship too close to the shore, however, and straight into Black Rock Point sometime after dark on October 19, 1867. The midship was pierced, and as the cool Caribbean water rushed into the engine room, the hot boilers exploded, splitting the ship in half. The ship sank quickly, and of the 146 people originally aboard — plus an unknown number of passengers from the Conway — only 23 survived.

The wreck of the Rhone is one of the Caribbean’s most famous, still in great condition and with an abundance of life. The wreck lies in two parts, the shallower stern, which is closest to Black Rock Point, is less intact than the bow, but offers beginner divers and snorkelers more opportunity to explore. The main attractions include the lucky porthole, which still features some of the original glass. Divers often rub the brass housing for good luck. In addition to the porthole, the propeller, which is now the oldest brass propeller in the world, sits partially embedded in the rock; viewing it allows divers to complete a short swim-through, passing under what remains of the hull. Captain Wooley’s teaspoon (although no one knows if it’s actually his) is also embedded in nearby coral.

The deeper bow part of the wreck is the most intact, and offers an amazing opportunity for divers to enter the wreck easily and comfortably. The wreck is open at several points and allows large entry and exit points, as well as a lot of light for divers. Bursting with marine life, it’s common to see stingrays, turtles and green morays, as well as large schools of fish. 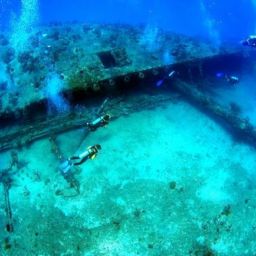 Experience Wreck Diving on “The Rhone”

Mastering the sport of diving can only be achieved by taking the plunge again and again and working on those skills that need the most improvement.